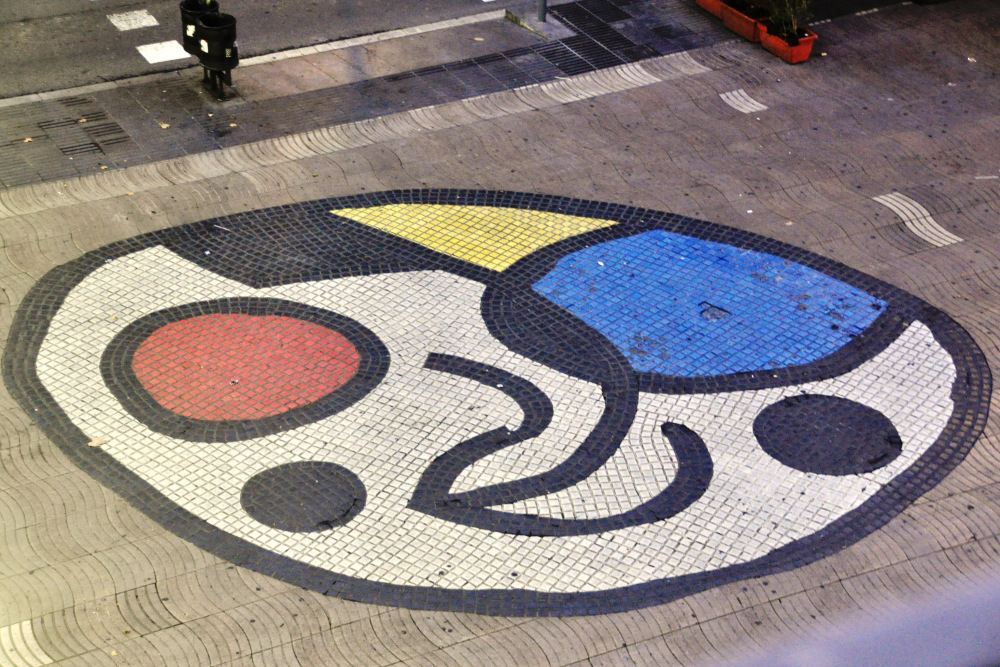 Now that the dust has settled, the official narrative is in place, the alphanumerics cast. As the story goes, soldiers of the Islamic State plowed a van 550m down the pedestrian strip of Las Ramblas before coming to a perfect stop on a Joan Miró mosaic. Early the next morning la policia killed five terrorists (wearing “fake suicide vests” ha) in Cambrils who were allegedly prepping for the next event. The day before the vehicle attack a house in Alcanar was destroyed in an explosion, which police say is connected. And of course the suspect is now at large so that the police can conduct their massive manhunt drill – drilling fear into the gullible populace.

The connection to Joan Miro and his surrealist artwork is intriguing in light of the surrealism we see presented in these staged events. The mural highlighted in this incident is called the Mosaic of the Pla de l’Os and is said to represent the cosmos. It’s also said to have been conceived as a Milestone =131 to Toponymy =1130, which is very curious, as toponymy is the study of place names and mystical toponomy is very much an obsession of the occult – and ours by extension through its deciphering.

Joan Miró i Ferrà =48 was born on the same day as Adolf Hitler, exactly 4 years earlier. We just covered how Big Ben will be silent for Four Years =48 and that’s exactly 48 months. Hoax =48. Spain =48. Anti-Fascist =48, and like Nazi Germany, Spain went through a fascist period under the rule of Francisco Franco Bahamonde =1048. ISIS Terror =148. Drill =480. Pawley =480 is a man who happened to survive both this incident and the Manchester Bombing (as somehow every event has someone who shows up at another event). The manhunt is ongoing for the 18-year-old driver, Moussa Oubakir =48.

Drill =330. Miro =330. Judeo-Masonic Conspiracy =330. Obama made history for the most ever likes on a tweet the day of the Charlottesville Rally, quoting Nelson Mandela: “No one is born hating another person because of the color of his skin or his background or his religion“ =330. [Mandela was born on 7/18 and Barcelona happened on the mirror date of 8/17.] Nelson Rolihlahla Mandela =303.

This also matched a prominently displayed banner in that opening scene of Mr Mercedes that read “First Annual City Jobs Fair One Thousand Jobs Guaranteed” =3300. Adolf Hitler =303. Saturn =303. Do What Thou Wilt =303. Viva Espana =33. Guernica =33. Picasso =303. All of which bring us to this crazy perfect synch: Francisco =33 Franco =33 Bahamonde =33 died (a supposedly natural death) at the age of 30,300 days old. Does anyone still doubt the long-count? The Mayor of Barcelona was also born on 3/3.

The King of Spain, Felipe VI, began his reign on 19 June 2014 – the same day of the year that Stephen King was hit by a van and Anton Yelchin was killed by his Jeep. Ya learn somethin weird every day.  by Brother Berg

Becomes first football card to cross the $1 million mark As the world prepares to watch the 2022 FIFA World...

https://videopress.com/v/zuoM618O?resizeToParent=true&cover=true&posterUrl=https%3A%2F%2Ffelastory.com%2Fwp-content%2Fuploads%2F2021%2F10%2Fghaddafi_mov_std.original.jpg&preloadContent=metadata Before NATO intervention oil production was 1.6 million barrels per day After the intervention and overthrow of Colonel Muammar...

For starters, the image plastered all over mainstream media after Kim Jong Un allegedly lobbed a missile over Hokkaido (top...

Unite the Right and Black Lives Matter are funded and managed by the Deep State. Now, the image of the...

CIA Director Mike Pompeo claimed Venezuela is overrun with Iranians, Hezbollah, Cubans and Russians in response to questions about Donald...