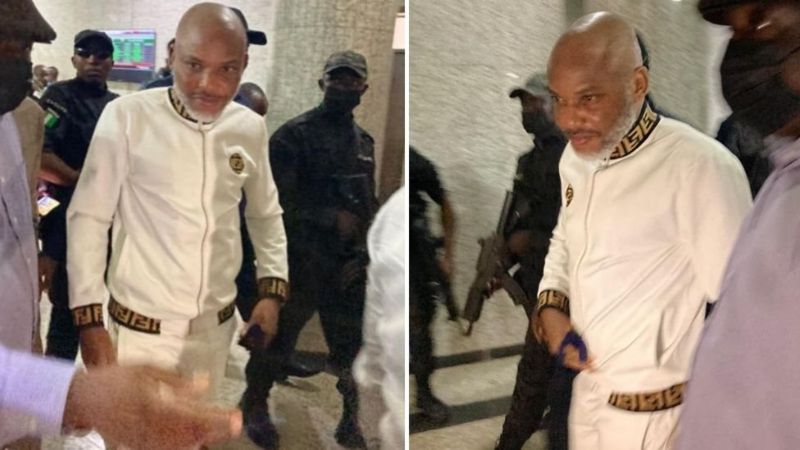 The tribal separatist leader request to be sent to prison denied

Nnamdi Kanu leader of the banned terrorist tribal separatist group, still wearing the Fendi suit he wore when he was arrested earlier in the year was denied his request to be transferred to the prison system. He had been in the Department of State Security detention facility since he was arrested.

The Indigenous People of Biafra(IPOB) a tribal separatist group banned by the Federal Government of Nigeria for being a terrorist group expressed joy when their leader appeared in court as speculation had been rife on social media that he has been poisoned. His trial had been delayed for three months when the DSS failed to produce him.

He was brought to the Federal High Court Abuja in a heavy security motorcade to answer charges of calling for secession, money laundering and being a member of a terrorist group.

Entrances to the court presided by Justice Binta Nyako was barricaded by security teams comprising of the DSS, army, civil defence and police all heavily armed. Journalists covering the trial were restricted and the crowds that gathered were sent away by gunshots in the air, horse whips and tear gas. Even the select journalists allowed into the court premises were prevented from covering the trial on orders from the judge.

Looking fit and beaming with smiles he took selfies with his lead counsel Ifeanyi Ejiofor before the session. Other lawyers and representatives of Ohaneze Ndigbo the tribal group were barred from the hearing.

Nnamdi Kanu pleaded not guilty to the seven count charge and was remanded in DSS custody till November 10 the next hearing date.