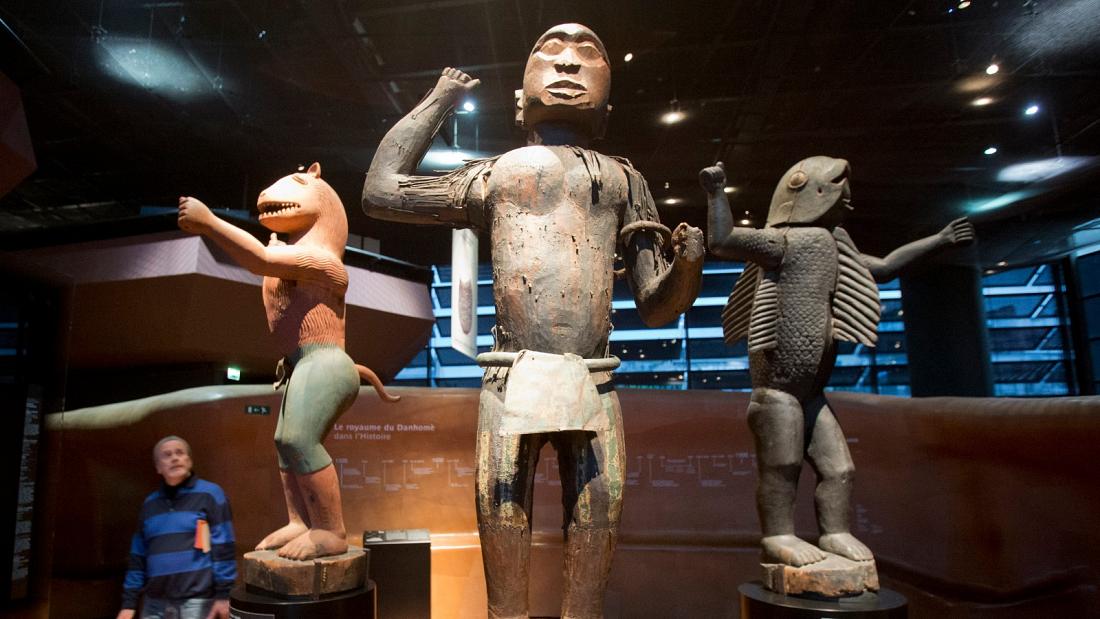 France has begun the process of returning art works looted from its former colony of Benin in West Africa at a special ceremony at the Quai Branly museum in Paris. President Emmanuel Macron who was the guest of honour said. “They are embarking on a journey to return home.”

The looted artworks consisting of anthropomorphic statues, royal thrones and sacred altars were looted when France conquered Dahomey Kingdom present day Benin Republic in 1892. Known as the “Abomey Treasures” they were taken as booty from the palace of King Benhazin of Dahomey. French Foreign Legion troops under Colonel Alfred Dodds broke into the palace and seized as many sculptures as they could. Dodd later donated the “Abomey Treasures” to a musuem in Paris in the 1890s.

Speaking at the handover ceremony that included Beninese and French dignitaries, Macron lauded the return; “the handing over of the art pieces represented an opportunity for the people of Africa to be able to speak their truth through their artefacts”.

“We have fought for these items to return home,” said Macron, referring to the challenges of the restitution process, which include training curatorial teams in Benin. The effort was both worthwhile and historic, he added.  “The journey that now awaits us is a just journey. It’s the right path forward that opens up so many other paths ahead,”

Benin’s Culture Minister Jean-Michel Abimbola called the return of the works a “historic milestone,” and the beginning of further cooperation between the two countries. The French Development Agency will give some €35 million toward the “Museum of the Saga of the Amazons and the Danhomè Kings” to be built in Abomey under a pledge signed this year.

The calls for former colonial powers to return looted art treasures to Africa continues to mount as there are still over 90,000 art pieces in European museums alone.

The 26 pieces from the collection will return to Benin on November 10.