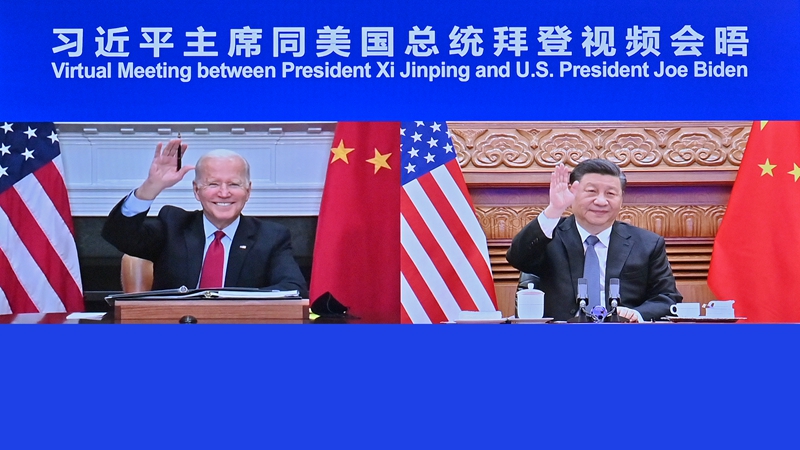 The highly anticipated Joe Biden and Xi Jingping virtual summit meeting went on for three hours and ended with no mutual agreement. The two leaders held their third chat in 10 months as tensions rise.

Among the issues discussed were human rights abuses in the Xinjiang region, trade, the future of Taiwan and cybersecurity. China has boosted its military power and cyber war between the two super powers have intensified.

On the issue of Taiwan. Xi told Biden point blank that China will take necessary measures should the separatist forces for “Taiwan independence” “provoke us, force our hands or even cross the red line.”

Xi noted that tensions between the US and China stems from the fact of the separatists agitation and the intentions of some Americans to use Taiwan to contain China. “Such moves are extremely dangerous, just like playing with fire,” Xi said. “Whoever plays with fire will get burnt.”

The Chinese leader then reminded Biden that the foundations of US-China relations rests on the pillars of One China and the three China-US joint communiques. Previous administrations have made solid commitments on the issues.

The true status quo of the Taiwan question and what lies at the heart of one China, Xi pointed out, are as follows: there is but one China in the world and Taiwan is part of China, and the Government of the People’s Republic of China is the sole legal government representing China.

Calling achieving China’s complete reunification an aspiration shared by all sons and daughters of the Chinese nation, Xi said, “We have patience and will strive for the prospect of peaceful reunification with utmost sincerity and efforts.”

“That said, should the separatist forces for ‘Taiwan independence’ provoke us, force our hands or even cross the red line, we will be compelled to take resolute measures,” Xi said.

The Chinese leader calling Biden an “old friend” said the US and China should focus on mutual co-operation, mutual respect, trade, international and regional hotspots.

Previous post BRITAIN MUST PREPARE FOR WAR WITH RUSSIA