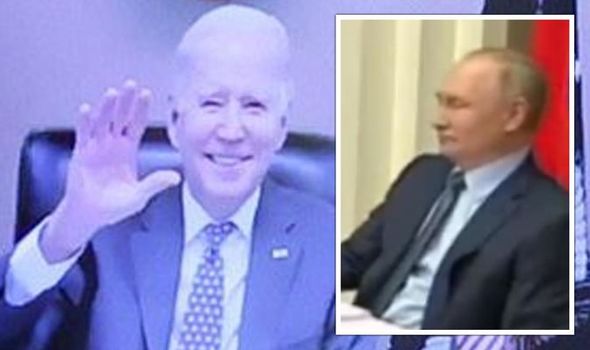 No agreement reached between the two leaders

The highly anticipated video call between the two superpowers Russia and the USA ended in stalemate. The two leaders President Vladimir Putin of Russia and President Joe Biden of the United States did not issue a joint communique over Russia’s purported plan to invade Ukraine in 2022.

The two leaders were attempting to de-escalate tensions between them over the situation in in Ukraine, NATO expansion in the east, strategic stability and Afghanistan. At the beginning of the meeting the two leaders greeted each other and Biden forgetting to turn on his microphone had to wave at Putin who waved back.

Before the closed door secure video call began the US leader hoped for an in person meeting in the future. Putin contacted the White House Situation Room from his Sochi residence and told Joe Biden in a “frank and businesslike manner” that Russia wanted “reliable and firm legal guarantees” excluding NATO’s further expansion eastward and deployment of “offensive strike weapons systems in countries adjacent to Russia.” The Kremlin readout of the call states.

When Biden raised concerns about the Russian military buildup, Putin responded that it was NATO “making dangerous attempts to conquer Ukrainian territory” and “building up its military potential at our borders.” He then lectured Biden on Kiev’ aggressive policy towards Moscow in regards the Minsk Agreement and the Normandy format talks. Putin also expressed concern that Kiev was taking “provocative” actions against the Russian speaking break away regions of Donetsk and Lugansk in eastern Ukraine.

In the White House readout, the United States stated its position that in the event Russia invades Ukraine severe economic sanctions will be placed on Russia and its financial institutions. Russia will be barred from the SWIFT system making Moscow unable to purchase dollars, pounds and euros.

Putin sat alone with a few pens and papers while Biden had his national security team with him. Biden intends to discuss the outcome with his NATO allies. Today’s conference is the fifth between the two leaders since Biden assumed office. Previously the two leaders had three phone calls and met in Geneva last June for the first Russia-US Summit since 2018.

Next post OMICRON VARIANT: UK MOVES TO “PLAN B”