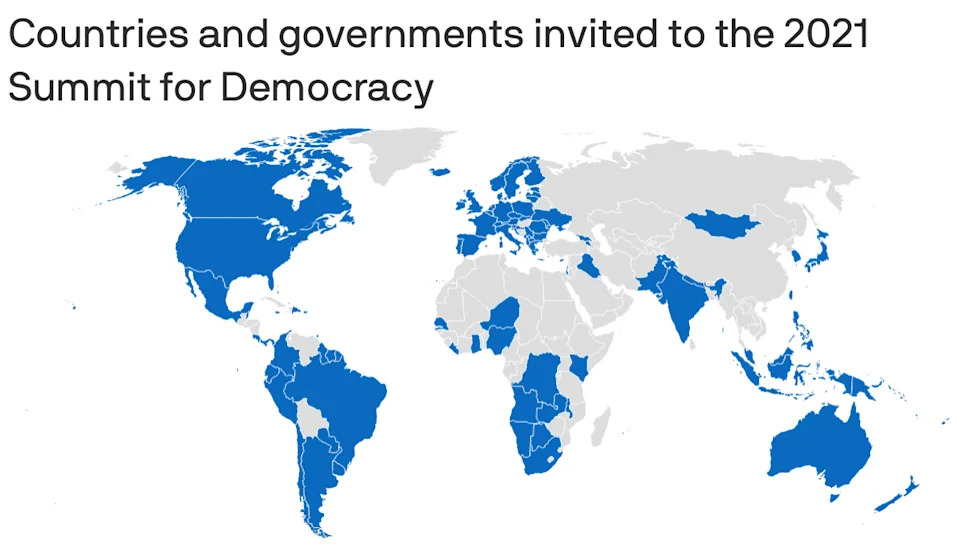 President Joe Biden of the United States is hosting a virtual summit for the promotion of democracy worldwide. Russia, China and Hungary not invited. Pakistan declines invitation. US allies Egypt and Saudi Arabia ignored.

The Chinese are worried that the US is seeking co-operation among the over 100 countries and civic groups attending the virtual summit hosted by the US president on the “Alliance for the Future of the Internet.”

“This is another example of how the United States is politicizing, instrumentalizing and weaponizing democracy,” he said.

“The political manipulation of the United States in the name of democracy will only be met with wide opposition in the international community,” he added.

Commenting on the future of the internet alliance he said. “The United States tries to impose its standards on others and restrict or take away the right to independently choose cooperative partners and develop the internet by countries, especially developing countries, thus stopping them from enjoying the dividend of digital economy and technological progress.”

Meanwhile in Moscow the Russian foreign ministry spokeswoman Maria Zakharova  wrote on her telegram channel. “This is exactly what we have been talking about for three years now: the United States is dismantling the system of international relations, which is based on international law and the central role of the UN, for the sake of creating its own comfort zone, which it intends to dominate single-handedly.”

In Islamabad the Pakistani foreign office issued a statement that it would engage with the US on a wide range of issues “at an opportune time in the future.”

“Pakistan is a large functional democracy with an independent judiciary, vibrant civil society, and a free media.”

The two day virtual summit hosted by Joe Biden in Washington has began drawing criticism. The United States just spent 20 years and $8 trillion dollars trying to impose democracy in the Middle East and Afghanistan which ended in failure. US is self seeking and after its own interests, the bitter 2020 US elections that former President Donald Trump claims was stolen from him, the subsequent protests at the US Capitol, its failure to provide basic services like free health and education to its citizens. The demonising of Russia and China will only worsen the international situation. The climate crisis and the Coronavirus pandemic calls for global co-operation but Biden has only succeeded in dividing the world into two camps. Democracies and Autocracies.