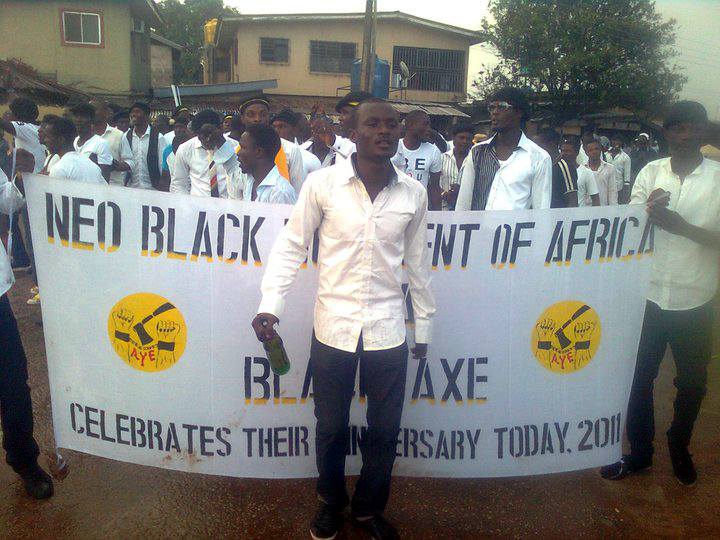 The BBC AfricaEye programme today exposed the the secretive cult known as “Black Axe” on Nigerian campuses and the “Neo Black Movement” worldwide in respectable circles. Operating since the 1970s, the group is among the most feared organised crime syndicates in Nigeria. The BBC began investigating the group after speaking to former members and examining a leaked trove of documents in 2019 and were able to to uncover a sordid web of murder, internet scams, drug smuggling and political thuggery.

Augustus Bemigho-Eyeoyibo the president of the NBM between 2012 and 2016. These files suggest Mr Bemigho, a successful investor and hotelier in Nigeria, has engaged in large-scale internet fraud totalling millions of dollars. In 2019 he ran for political office in Edo state under the banner of the All Progressives Congress (APC) party.

“Uche Tobias” a hacker who exposed the thousands of NBM/Black Axe documents and emails and gave them to the BBC. One email read. “We have removed him close to 1M dollars.” and the email was addressed to Mr Bemigho. in another uncovered post from a secret online forum labelled “Hit” a man lies on the floor dead with four gashes on his head. His white shirt covered in his own blood. This is one victim of many in the ongoing battle for supremacy among other criminal gangs with exotic names like “Eiye” “Buccanneers” “Pyrates” and the “Maphites.”

From their base in Benin City Edo state the nefarious NBM stretches its tentacles on four continents. Formed in the University of Benin as a student fraternity the NBM has as its symbol was a black axe breaking chains, and its founders said their aim was to fight oppression. The NBM was inspired by the anti-apartheid struggle in South Africa, but in structure, secrecy and brotherly commitment they resemble the Freemasons. To illustrate their reach into the heart of the Nigerian government where many of the members are army, navy, air force, in academia and are priests and pastors. They are a registered entity with the Corporate Affairs Commission.

It claims to have three million members around the world, and regularly publicises charitable activity – donations to orphanages, schools and the police, both in Nigeria and abroad. It holds huge annual conferences, some of which have been attended by prominent politicians and celebrities.

Two documents, which appear to have been leaked from the internal communications of the NBM, suggest that 35m naira (more than £64,000) was funnelled to the organisation in Benin City to “protect votes” and ensure support for a governorship election in 2012. In exchange for the support, the files state “80 slots [were] allocated to NBM Benin Zone for immediate employment by the state government”. This money was allegedly distributed directly “through the then Chief of Staff Hon. Sam Iredia” – who has now died.

During interviews with senior members of the NBM in Lagos, their legal representative confirmed that “a number of politicians” are members. He went on to name the Deputy Governor of Edo State, Philip Shaibu, as an example.

Leaders of the NBM claim Black Axe is a rogue, breakaway group. Publicly they strongly disassociate themselves from the name and are adamant that the NBM opposes all criminal activity.

“NBM is not Black Axe. NBM has nothing to do with criminality. NBM is an organisation that tends to promote greatness in the world,” says Olorogun Ese Kakor, the current president of the organisation, in an interview with the BBC in July 2021.

International law enforcement have a different view. Statements by the US justice department, in the course of its prosecution of Black Axe members since 2018, say that the NBM is a “criminal organisation” and “part of the Black Axe”. Similar statements have been made by authorities in Canada, who have said the NBM and Black Axe as “the same”.

Previous post THE ENDURING MYSTERY OF THE “LADY OF GUADALUPE”

Next post HOME SECRETARY CAN WITHDRAW CITIZENSHIP WITHOUT NOTICE