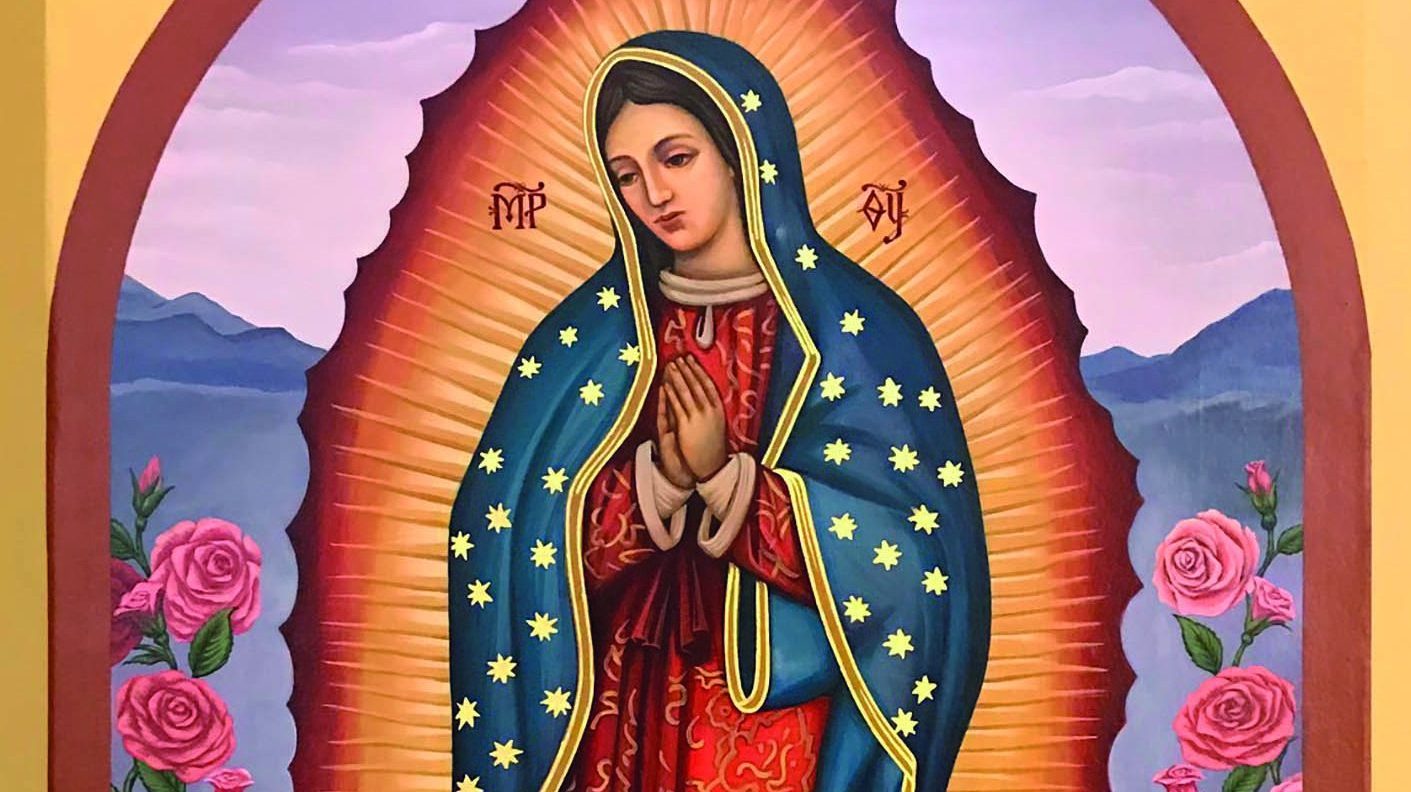 From the book of Revelation Chapter 12

“A great sign appeared in the sky, a woman clothed with the sun, with the moon under her feet, and on her head a crown of twelve stars. She was with child and wailed aloud in pain as she labored to give birth. Then another sign appeared in the sky; it was a huge red dragon, with seven heads and ten horns, and on its heads were seven diadems. Its tail swept away a third of the stars in the sky and hurled them down to the earth. Then the dragon stood before the woman about to give birth, to devour her child when she gave birth. She gave birth to a son, a male child, destined to rule all the nations with an iron rod. Her child was caught up to God and his throne.”

On December 12 1531, the Virgin Mary appeared to Juan Diego and imprinted herself on his tilma (cloak). The Bishop of Mexico Juan Zumarraga had asked for a sign from the Virgin Mary as an answer for his prayers for Mexico to converted. On the third appearance to Juan Diego December 12 she instructed Diego to go to the top of the Tepeyac hill and gather some flowers for the bishop as a sign that she wanted a church built in her honour. The flowers were Castillian roses of a dark pink hue which was a miracle in itself because roses don’t grow in winter. Instructed by the Virgin not to show anyone till he met the bishop he gathered the roses in his cloak. When he unfurled the cloak the pink roses spilled on the floor the image of the Virgin as she appeared to Juan Diego was imprinted on his cloak to the astonishment of the bishop and his attendants. The Virgin had given him the sign he asked for. Roses

from his hometown of Castille.

490 years later the tilma has not lost its texture nor its colours.

The form and colours have a very rich symbolism. Millions of Christians round the world today will honour her in her apparition in December 1531 as the “Lady of Guadalupe.” In Juan Diego’s Nahuatl tongue, “Coatlaxopeuh“—rendered in Spanish as “Guadalupe“—meaning “the one who crushes the serpent.” In Juan Diego’s Aztec culture, symbolism had a lot of meaning.

The image on Juan’s cloak shows a fusion of two cultures and has led to the conversion of millions. The blood thirsty Aztec gods replaced by the Prince of Peace Jesus Christ. The virgin appears as a mestiza and her hair parted in the middle signifies she is a virgin maiden in Aztec culture. Scientific analysis and data shows there are thirteen people in her eyes including the images of Juan Diego and Bishop Zumarraga.

On the upper part of her reddish dress, one can see a cross. Various Christian theologians ay that symbolises her consecration to her Son Jesus. her identity as Queen of Heaven and Earth is seen in the colours and decorations on her garments. The red dress is the earth and the greenish blue mantle is the heavens. The mantle colours are only worn by Aztec emperors thus confirming her royal status.

The Virgin stands on the crescent moon Aztec serpent god Quetralcoatl. She has crushed and defeated him. The stars on her mantle show the stars in their positions as they appeared before dawn on the morning of December 12 1531. With her hands joined in prayer shows she isn’t God and her finger points to the cross. As Christians say through Mary to Jesus.

A dark ribbon above her womb signifies she is pregnant. On the center of her dress overlying her womb is a four petal jasmine flower which in Aztec symbolism is the sign of the Divine and the center of the universe. The other four petal flowers on the dress signifies to the Aztecs that the fifth age of peace has begun. The Virgin stands in front of the sun which symbolises the the chief god of the Aztecs Huitzilopochtli. She announces that there is a God greater than the sun god. An angel supports her by holding her greenish blue mantle and her reddish dress signalling the Son is from both the Earth and Heaven.

The researcher and physicist Dr. Aldofo Orozco said that the fabric knitted from agave fibers not deteriorating in almost 500 years “is completely beyond any scientific explanation.”

“All the cloths similar to the tilma that have been placed in the salty and humid environment around the basilica have lasted no more than 10 years.”

Nitric acid was poured on it by mistake while being cleaned in 1785 and later in 1921 a man tried to blow it up with dynamite but only the church was destroyed and the image remained untouched.