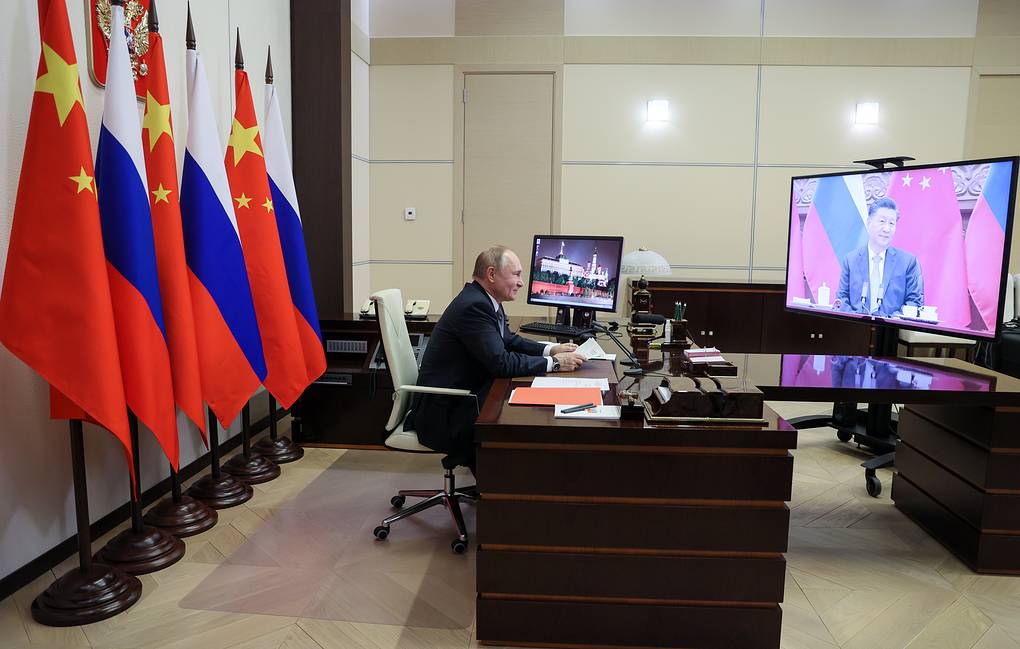 China supports Russia on its confrontation with NATO and in excahnge Putin will support Chinese claims on Taiwan and the South China Sea.

President Vladimir Putin of Russia and Xi Jingping of China have concluded their December 15 virtual summit. According to Chinese Central TV, the conversation started at 11:07 Moscow Time and concluded at 12:21.

As the virtual meeting began, Putin waved at Xi like an old friend and Xi responded likewise with a broad smile. The aim of the meeting according to the Kremlin is to make it “possible to discuss the development of Russian-Chinese comprehensive strategic partnership.”

Putin described the Sino- Russo partnership as  “a sample of genuine interstate cooperation in the 21st century.” According to him, a new model of interaction has been shaped between two countries “based among other things on such principles, specifically, as non-interference in domestic affairs and respect for one another’s interests, determination to turn the shared border into a belt of everlasting peace and good neighborliness.”

In solidarity with China, Putin condemned plans to  ‘attempts to politicize sports’ referring to the

US diplomatic boycott of the 2022 Beijing Winter Olympic Games. Other nations including Britain and Canada have since followed suit because of their concerns over alleged human rights abuses in China, including the alleged forced labor and sterilization of Uyghurs in the north of the country. That has led to warnings by China of repercussions over the boycotts. Now Putin, who has accepted an invitation from Xi to attend the Games which will allow him to avoid a ban imposed as the result of a World Anti-Doping Agency ruling on Russia, has said he expects the event to succeed. Putin told Xi China “knows how to do it” ahead of what he expects to be a Winter Olympics “held at the highest level” in Beijing.

Some Western leaders are questioning the diplomatic boycott. French President Emmanuel Macron has described the impact of diplomatic boycotts as “questionable”, and Austrian Foreign Minister Alexander Schallenberg said on Monday: “Politicizing sporting events like the Winter Olympics does not seem useful to me.”

“As agreed, we will hold negotiations with you, then we will participate in the opening ceremony of the Winter Olympic Games.”

Xi gushed over Putin calling him an “old friend.”

Xi then bashed “certain forces in the world” for trying to meddle in the internal affairs of China and Russia under the pretext of “democracy” and “human rights.”

China will enhance communication and coordination with Russia to encourage the international community to take the right view on democracy and defend the legitimate democratic rights of all countries, Xi promised Putin.

Disparaging Joe Biden’s Summit for Democracy. Xi said that democracy is a lofty aspiration and common value of all humanity and also a right enjoyed by people of all countries.

“Whether a country is democratic or not and how to better realize democracy can only be left to its own people to decide,” Xi said.

“The close co-ordination between Russia and China on the international arena – the responsible joint approach to solving urgent global issues – has become a stabilizing factor in international affairs.” Putin praising the Russo-Sino alliance.

At the conclusion of the meeting, Yuri Ushakov, Putin’s foreign policy advisor proclaimed that “particular attention was paid to the need to intensify efforts to form an independent financial infrastructure to service trade operations between Russia and China.”

“We mean creating an infrastructure that cannot be influenced by third countries.” This was in response to the West threat of removing Russia from the SWIFT payment system if it dares invade Eastern Ukraine. According to Chinese data trade between Russia and China exceeded $100 billion for the first time in the first three quarters of 2021.