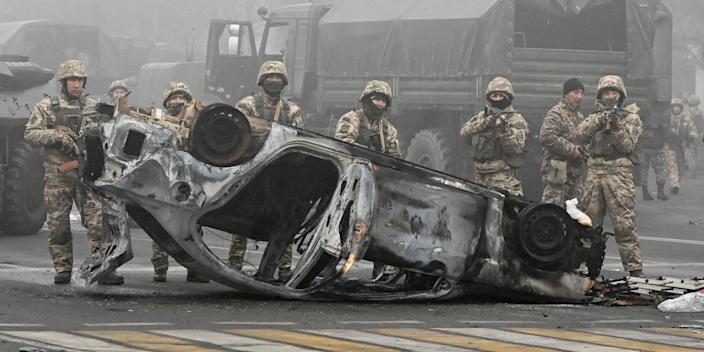 Antony Blinken the US Secretary of State told CNN Sunday that the United States will seek clarification on why Kazakhstan requested security assistance from the Collective Security Treaty Organisation (CSTO) amid violent protests across the country.

He said America has “real questions” about “why they felt compelled to call in this organization that Russia dominates,” insisting “we’re asking for clarification on that. What’s imperative now is that all of this be dealt with in a peaceful manner that respects the rights of those who are trying to make their voices heard.”

With evidence of viral videos showing the protests escalating into looting, arson and beheadings. He clarified he was referring to “peaceful protesters.” The Kazakhstan state TV Khabar-24 said 164 people were killed, 2,200 people treated for injuries 5,500 terrorists detained and the arrival of the CSTO peacekeepers has restored law and order. On January 7, The Kazakh President Kassym-Jomart Tokayev said in a speech: “I have given an order to open fire to kill terrorists without warning.”

Moscow has already hit back at Washington’s criticism of the CSTO peace keeping operations. Blinken had told the press. “Once Russians are in your house, it’s sometimes very difficult to get them to leave.”

Moscow responded. “Indians of the North American continent, Koreans, Vietnamese, Iraqis, Panamanians, Yugoslavs, Libyans, Syrians and many other unfortunate people who are unlucky enough to see these uninvited guests in their ‘home’ will have much to say about this.”

2 thoughts on “None of US Business”