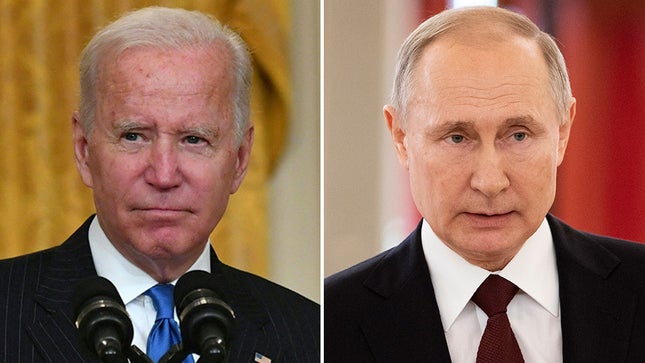 At the White House press conference to mark one year of his presidency. Joe Biden told reporters that he believes that President Vladimir Putin “will move in” to Ukraine despite warnings of severe economic consequences for Russia. But he admitted a “minor incursion” would elicit a lesser response than an “invasion.”

“I’m not so sure he is certain what he is going to do. My guess is he will move in. He has to do something,” Biden said. “He is trying to find his place in the world between China and the west.” Biden admission that Russia is bent on an “incursion” or “invasion” is firm belief that Moscow will move into Ukraine after massing over 100,000 troops on the border.

“He’s never seen sanctions like the ones I promised will be imposed if he moves, number one,” Biden said, adding the level of punishment would depend on what Russia’s invasion looks like. “It’s one thing if it’s a minor incursion and we end up having to fight about what to do and not do, et cetera. But if they actually do what they’re capable of doing with the forces amassed on the border, it is going to be a disaster for Russia if they further invade Ukraine. And that our allies and partners are ready to impose severe cost and significant harm on Russia and the Russian economy.”  Russia will not be able to deal in any US dollar denomination if sanctions are imposed.

A visibly angry Ukrainian official told CNN. “This gives the green light to Putin to enter Ukraine at his pleasure.”

The West response to Russia’s next moves will depend on NATO unity.

“If there is something that is where there’s Russian forces crossing the border, killing Ukrainian fighters, et cetera, I think that changes everything,” the President said. “But it depends on what he does, to what extent we’ll get total unity on the NATO front. It’s very important that we keep everyone in NATO on the same page. That’s what I’m spending a lot of time doing, and there are differences. There are differences in NATO as to what countries are willing to do, depending on what happens,” he added.

The American President then warned Russia. “This is not all just a cake walk for Russia,” he went on. “Militarily, they have overwhelming superiority. And as it relates to Ukraine, they’ll pay a stiff price immediately, near term, medium term and long term if they do it.”

Meanwhile in Kyiv, Ukrainian President Volodymyr Zelensky on Wednesday urged Ukrainians to not panic and to “calm down” over fears of a possible Russian invasion. “All our citizens, especially the elderly, need to understand this: Everyone needs to exhale. Calm down. Don’t run for emergency supplies like buckwheat and matches. To all the media: Remain as the media, not become a source of mass hysteria. Do not help the enemy in the pursuit of hype by reporting daily that war may happen tomorrow! This will definitely not stop it.” “What is new here? Is this not the reality for the past eight years? Didn’t the invasion begin in 2014? Did the threat of the war emerge just now?” he said.