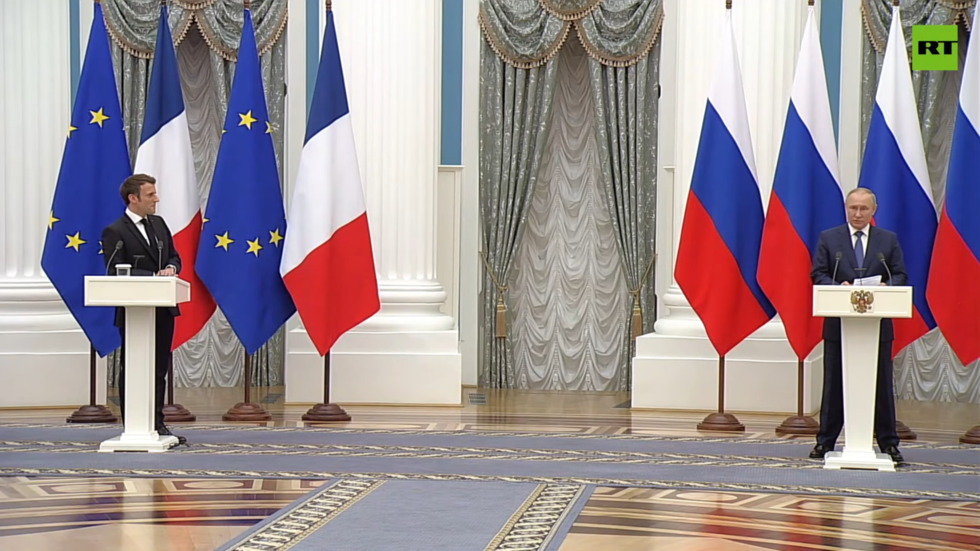 Russian President says there are no victors in atomic wars

At the press conference at the end of hours long meetings that included lunch and dinner, President Putin told reporters that the entry of Ukraine into NATO will trigger war between France and Russia. he was speaking alongside the French President, Emmanuel Macron who was in Moscow in an attempt to defuse the escalating tensions in eastern Europe.

Putin explained in no uncertain terms what Ukraine being accepted into NATO could lead to as he responded to a question by a French journalist.

“You want France to fight Russia? That’s exactly what would happen” if Ukraine joins NATO and tries to implement its state policy of ‘reintegrating’ Crimea by force, Putin told reporters. Kiev views Moscow as an enemy and has vowed to retake the Crimean peninsula by force. An attack will trigger Article 5 of NATO’s founding treaty, pulling all of Europe into a war with Russia, Putin explained.

“Russia is one of the world’s leading atomic powers. There would be no victors,” Putin told reporters. “[Macron] does not desire such an outcome. Neither do I.”

Putin said he and Macron had a productive discussion on de-escalating the situation in Ukraine. The Russian president reiterated that Kiev has been refusing to implement the Minsk agreements and make peace with the two breakaway regions of Donetsk and Lugansk, choosing to persecute Russian-speakers in Ukraine instead. Neither of them offered any details on what the French proposals might be.

Macron meanwhile said new, “alternative” mechanisms to ensure stability in Europe may need to be constructed, as revising the existing arrangements and agreements would not be practical. After meeting with Putin he flies to Kiev for talks with Ukrainian President Volodymyr Zelensky on Tuesday.

On the other side of the Atlantic the U.S. President Joe Biden met with German Chancellor Olaf Scholz at the White House in their first face-to-face talks since Scholz assumed power in Berlin in December. At the press conference questions remain about whether the two leaders are prepared to respond to a military incursion by halting the completion of the Nord Stream 2 natural gas pipeline.

“If Russia invades — that means tanks or troops crossing the border of Ukraine — there will be no longer a Nord Stream 2. We will bring an end to it,” Biden said during a press conference with Scholz following their meeting.

The German leader was mute on the Nordstream 2 pipeline and said. “As I already said, we are acting together. We are absolutely united, we will not be taking different steps, will do the same steps and they will be very, very hard to Russia,” Scholz told reporters.

Germany is a major customer for Russian natural gas and there would be consequences for the rest of Europe, too. Russia accounts for about one third of all natural gas and one fourth of all crude oil consumed by the European Union, making it “the bloc’s largest single energy source,” according to the Council on Foreign Relations.