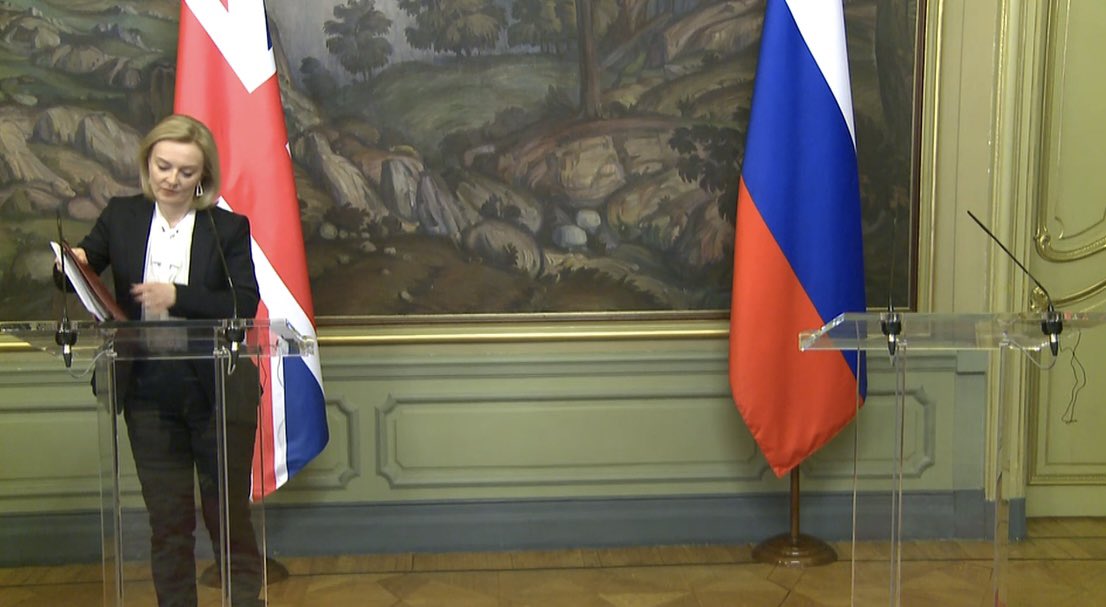 The much anticipated meeting between the top diplomats of Russia and the UK ended on a frosty note when the Russian foreign minister Sergei Lavrov walked out during a press briefing with Liz Truss the British foreign secretary Thursday.

The meeting held in Moscow negotiate the way forward over Russia security guarantees, began with Liz Truss saying, “Fundamentally, a war in Ukraine would be disastrous for the Russian and Ukrainian people and for European security and together NATO has made it clear that any incursion into Ukraine would have massive consequences and carry severe costs.”

Sergei on his part said “Ideological approaches, ultimatums, threats — this is the road to nowhere. mutually respectful dialogue can lead to normalised relations.”

When Truss repeated that Russia remove her troops. Sergei asked whether London recognises Moscow’s sovereignty over the regions of Rostov and Voronezh, where large troop movements are said to have taken place in recent days, close to the Ukrainian border. She replied that the UK “will never recognise Russia’s sovereignty over these regions.” A gaffe that was corrected by the UK ambassador Deborah Bronnert who promptly informed Truss that those regions were in Russia.

“Some are saying we’re waiting for the ground to freeze in Ukraine so that Russians tanks can move forward, well, this is the frozen ground between us and our British counterparts. Either our counterparts aren’t aware of the facts, or they’re ignoring them,” Lavrov went on.

He also hit out at Truss’ suggestion, raised by journalists, that Moscow is seeking to “threaten” its neighbor by amassing a reported 100,000 troops close to the border. “We don’t want to threaten anyone,” he insisted. “We’re the ones being threatened!”

The Russian foreign minister said the finger pointing must cease then wondered why the American and British were withdrawing their diplomatic staff from Kiev. “Now we’re thinking maybe the UK or US is planning something as they’re advising their staff to leave.” Lavrov had to leave the presser saying it was like talking to a deaf person.