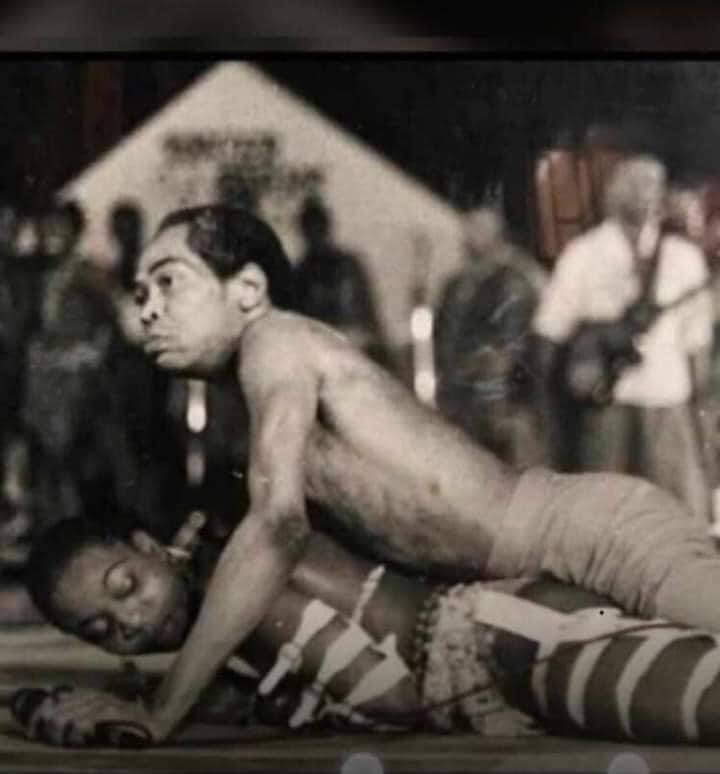 In an exclusive interview with Felastory on the 29th anniversary of Sanwo Shokoya dying in Kalakuta, Oghenemaria Urhobo talks about his life and time as one of Fela Kuti’s personal aides

Mr Urhobo: I am well thank you.

Felastory: Please tell us about yourself.

Mr Urhobo: I was born on March 2 1966 at the Lagos Island Maternity Hospital. My grandfather was the late “Saint” Gideon Meriodere Urhobo who founded God’s Kingdom Society (GKS) in Warri. I am Urhobo by tribe. I attended Government College Eric Moore between 1978-1983. When I left high school I got admission to read electrical engineering at the Yaba College of Technology.

Felastory: Did you graduate from Yabatech?

Mr Urhobo: No. I had to drop out due to my rebellious attitude and I went into the streets of Lagos hustling and doing all kinds of stuff. In 1990 I paid my first visit to the Fela’s Afrika Shrine on Pepple Street. I was hooked. It was as if I belonged here. Fidelis Ahiere personal assistant to Fela took me to Kalakuta and introduced me to Fela. My first job in Kalakuta Fela’s house was washing his clothes while the late Abang the Calabar man did the ironing. After some time I became the house electrician responsible for anything electrical. From fixing fans to replacing sockets.

Felastory: How much were you paid?

Mr Urhobo: I was paid N15 weekly with daily feeding allowance of N10. I was living in Kalakuta so I was entitled to eat from Fela’s soups that the late Fehintola cooks weekly for Fela.(Fehintola was Seun Kuti’s mother).

Felastory: You were in prison with Fela in 1993 with Majemite Jaboro (author of The Ikoyi Prison Narratives), Jide John, Taiwo Olagorusi (Mr T Studios) and Theophilus Issesele ( Egypt 80 maracas player) Tell us your connection with Sanwo who died in Kalakuta.

Mr Urhobo: Sanwo was the Shrine electrician and sometimes manager. His troubles began after the 1992 European Tour of which Sanwo was excluded. His absence cost Fela about $6000 because at every foreign show the stage electrician gets paid $600. So Sanwo’s presence would have saved Fela a bit of money. When Fela returned from Europe he fell sick and in early January Sanwo had been given money to prepare the stage lighting for when Fela will resume shows on the 21st of January 1993. Nobody knew what he did with the money so he was summoned to Kalakuta to explain.

Mr Urhobo: At about 3.00am on the 21st of January. Fela was on the toilet when he called me. He gave me samples of organza the material for his costume shirts and money to buy the material in Lagos Island. I was also responsible for buying his special Ghana bread, his special moinmoin (bean pudding) the material for his costumes and his daily newspapers. At about 7.00am before I went out to buy the newspapers Sanwo was being slapped in Fela’s room and told to confess his drug habit. Afterwards Fela with his entourage; Dodo, Ese, Chinwe, Peggy, Omowunmi, Osaron, Tubor and Chima left for the living room. Akpor a room aide, on Fela’s orders began whipping Sanwo with telephone cable while he was held spread-eagled by other boys.

Felastory: So you were watching the beating?

Mr Urhobo: Yes. Jide John was avoiding Fela so Fela would not remember any past transgression. Majemite the Shrine priest had gone out with Ehi who was Fela’s personal driver. As the beating went on Fela asked me “Na where I send you be this?” I then left for Lagos Island and did not come back till late evening. When I got to Gbemisola street a group of guys were outside Pepperlicious a lounge bar beside Kalakuta. “Sanwo don die.” They told me. I went into Kalakuta and outside Fela’ s room a tall huge man in plainclothes identified himself as Divisional Police Officer Dhankhan from Area F. “There is a corpse in your house.” Fela was told and he denied saying he had a sick boy in the house and the ambulance was coming to take him to the hospital. The Police then went upstairs to where Sanwo lay dead and brought him downstairs. Everybody the Police could get their hands on were arrested.

Mr Urhobo: Mr T, myself, Jide and Majemite. We were all taken to Area F where it became another ballgame. We were dispersed. Mr T was left at Area F, Fela was taken to Panti State Intelligence and Investigation Bureau (SIIB), I was taken to Sabo police station, Jide was taken to Adekunle and Majemite was remanded at Denton police station. We were charged with conspiracy to murder at the Yaba magistrate court and the Lagos High Court will judge the case. The magistrate remanded us at Ikoyi Prisons.

Felastory: For such a serious case as murder how did Fela get bail?

Mr Urhobo: Fela wrote in his statement that a boy was sick in his house and the police came and now the boy is dead. Sanwo died as a result of internal bleeding brought on by the whipping. He had an appendix operation. The first motion for bail was for Fela and brought by the late Dr Beko Ransome Kuti and Femi Falana the Kalakuta lawyer. Fela was re-arrested and taken to Panti where he learnt that if Sanwo had not been given water to drink when he complained of thirst before dying he would still be alive. The high court at Igbosere remanded Fela in custody and sent him back to Ikoyi. The next bail application was successful, all of us were granted bail.

Felastory: Majemite Jaboro alleges in The Ikoyi Prison Narratives that the late Beko and Femi Falana paid off the Police to drop the case. How true is that?

Mr Urhobo: I would not know about that but I am certain the Police did not come to court. They did not present any evidence. Fela made a statement against them he had a sick boy in the house which the police later claim was dead. No autopsy report was produced. So the judge had to strike the case out.

Felastory: Did the late Sanwo get justice?

Mr Urhobo: In the real sense of it. Sanwo did not get justice besides Sanwo was not good to his family because of his addiction to crack.

Felastory: Kalakuta did not set up a drug rehabilitation centre since Fela had a sister for a nurse and two brothers who were medical doctors. Why?

Mr Urhobo: That is up to the Kuti family. For over 10 years before he died, Sanwo never admitted he was a drug addict.

Felastory: Ok. When did you leave Kalakuta and why?

Mr Urhobo: To cut a long story short it was because of my girlfriend Kemi. Fela invited her to his room so he could sleep with her. But unfortunately Fela slept off and Kemi left. When Fela woke up he was angry because he thought Kemi was spending the night with me but I had gone with Kunle, Fela second son to lock up the Shrine at 11.00pm. When I came back Fela summoned me and Fosibor the Egypt 80 conga drummer was ordered to give me three slaps. I left to live with Demola Coker the son of the late Justice Coker. When Fela saw me again he told me to pack my things and leave his house. I had to live with my mum in Fadeyi.

Felastory: There are unsubstantiated rumours that Fela was poisoned when he was in the custody of the National Drug Law Enforcement Agency (NDLEA). How true is that?

Mr Urhobo: Yes, when Fela was arrested for marijuana by the NDLEA and detained. He had no access to fresh food or marijuana. So he had to eat NDLEA food which was was probably laced with a slow acting poison or he was sprayed with poisonous gas.The last show at Port Harcourt he fell sick. Dolupo his sister knows Fela does not take Western medicine and he refused to eat fearing that they will slip Western medicine in his food. It was Ese who warned him about it There was nobody he could trust. The “archangels” as he referred to us in prison were no longer in the house. Jacqueline Adewunmi his spiritual advisor who brought us fresh food in prison was missing. I was the only one who knows where to buy Fela’s special Ghana bread and moinmoin. Dede Mabiaku did not live in the house. So in the end there was nobody for him.

Felastory: How did you know when he died?

Mr Urhobo: I was on the street and read it in the newspapers. I was shocked and sad because of his name Anikulapo which means I have death in my pouch. I was at the Tafawa Balewa Square for the funeral and followed the procession from TBS to Ikeja.

Felastory: Can you tell us a bit about Fela’s spirituality?

Mr Urhobo: It is difficult to put into words the Kalakuta spirituality. You have to be there to understand and feel it. Things happen in the spirit world before they manifest in the physical world. When the girls are fighting and Fela is watching and running commentary on how it will later manifest as incidents in other countries. This girls are witches and and they are flying in the spirit world when they fight. When you look at a country’s history you will know what is happening in Kalakuta. You know we have over 250 languages in Nigeria and Yoruba is the spiritual language. SA-LA-RI (Salary) means Sir/Run is what we see. Every morning people get up to go to work in a run and they will be saying Sir Sir for the monthly SA-LA-RI.

Felastory: Its been really good talking to you. So what do you do for a living?

Mr Urhobo: I am a National Union of Road Transport office administrator. There was no financial benefit in Kalakuta only the spiritual awareness that material things were of no consequence in the end. I have been on the streets since I was young and I will survive.