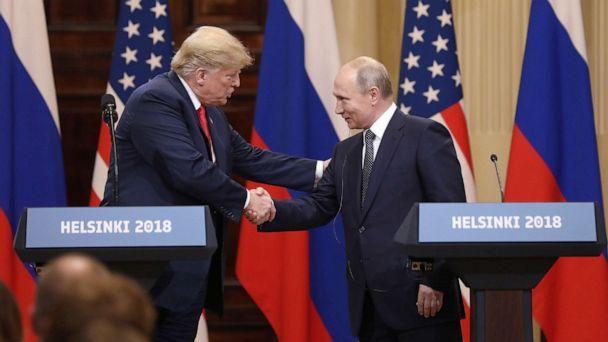 Former US President Donald Trump has hailed President Vladimir Putin of Russia recognition of the Donetsk and Luhansk republics in a radio interview early Wednesday. While at the same time heavily criticising President Joe Biden inept handling of the crisis.

Speaking on the conservative talk radio show. “The Clay Travis and Buck Sexton Show.” Trump said. “You gotta say, that’s pretty savvy,” referring to Putin’s recognition of the Donbass. “And you know what the response was from Biden? There was no response. They didn’t have one for that. No, it’s very sad. Very sad.”

“This is genius,” Trump said. “Putin declares a big portion of the Ukraine … Putin declares it as independent. Oh, that’s wonderful.”

Trump a long time admirer of Putin, said he got along well with the Russian president.

“This never would have happened with us,” Trump waxing nostalgic of his time in the White House. “He’s acting a little differently I think now.”

“Now it has begun, oil prices are going higher and higher, and Putin is not only getting what he always wanted, but getting, because of the oil and gas surge, richer and richer.” He went on.

The former US president laid it on the current president. Blaming Biden for making Russia richer with the high gas prices. Trump had been silent over the crisis but in a rally last month echoing the mood of most Americans he said. “Everyone in Washington is obsessing over how to protect Ukraine’s border – but the most important border in the world is not Ukraine’s border, it’s America’s border.”