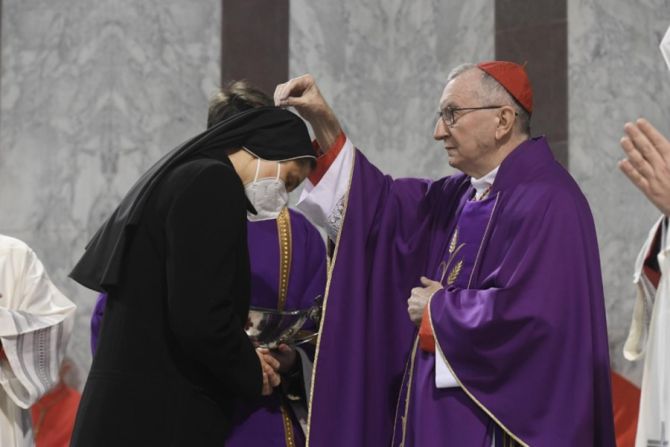 The 40 Days preparation for Easter begins with fasting and penance

Vatican Secretary of State Cardinal Pietro Parolin on Ash Wednesday stood in for Pope Francis at the first century basilica of Santa Sabina in Rome where traditionally the popes do the blessing and imposition of ashes. The Pope was unable to attend due to knee issues.

Cardinal Parolin celebrated the Ash Wednesday Mass and read the Pope’s homily in which Francis called on Christians to guard against the temptation to allow Lenten prayer, fasting, and almsgiving to be taken over by an “illness of appearances” that cares more about earthly than eternal rewards.

The pope said that the rite of receiving ashes was an “austere sign, which leads us to reflect on the transience of our human condition.”

He added that it was “like a medicine that has a bitter taste and yet is effective for curing the illness of appearances, a spiritual illness that enslaves us and makes us dependent on the admiration of others.”

“The ashes bespeak the emptiness hiding behind the frenetic quest for worldly rewards,” he said. “They remind us that worldliness is like the dust that is carried away by a slight gust of wind. Sisters and brothers, we are not in this world to chase the wind; our hearts thirst for eternity.”

“Lent,” he underlined, “is the time granted us by the Lord to be renewed, to nurture our interior life and to journey towards Easter, towards the things that do not pass away, towards the reward we are to receive from the Father.”

With the pandemic over the Vatican announced that Pope Francis will celebrate Ash Wednesday at the Santa Sabina Basilica in 2022 but acute knee pain has forced him to rest. Just last week at the papal General Audience Francis designated Ash Wednesday as a day of fasting and praying for peace in Ukraine. “I invite everyone to make next March 2, Ash Wednesday, a day of fasting for peace. I encourage believers in a special way to devote themselves intensely to prayer and fasting on that day. May the Queen of Peace preserve the world from the madness of war.”