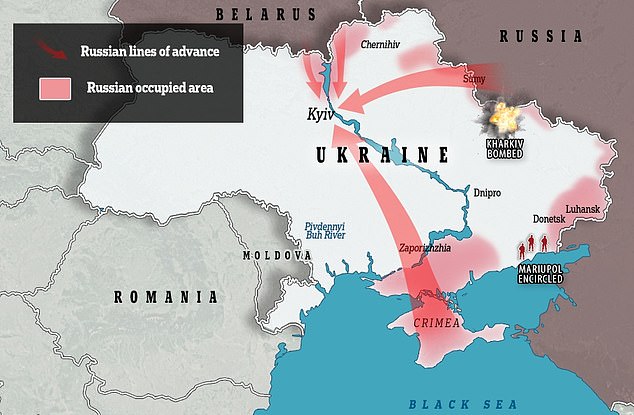 On Thursday at the Kremlin, President Vladimir Putin addressed the Russian Security Council assuring them the military operation in Ukraine is going according to plan, and all tasks are being implemented “successfully.”

“Our soldiers fight steadfastly, with a full understanding of the justice of their cause, even after being wounded, they remain in formation, sacrifice themselves […] in order to save comrades and civilians,” Putin said, noting that Russian troops are striving to prevent civilian casualties in Ukraine.

Putin also said that nationalists and foreign mercenaries in Ukraine are using civilians as human shields. They have not kept their promise to remove heavy military equipment from residential areas, he continued. Russian troops “have provided corridors in all collision zones without exception, provided transport so that civilians, foreign citizens have the opportunity to go to a safe place” – something that “nationalists do not allow to be done”, Putin outlined.

On the other hand the Russian MoD spokesman Major General Igor Konashenkov, said that the West has increased the dispatch to Ukraine of contract soldiers from private military companies, with the US military intelligence launching a massive campaign to recruit PMC contractors for Ukraine.

Ukrainian President Volodymyr Zelensky, in his turn, stated that Ukraine expects some 16,000 foreign mercenaries to come and fight for the country.

The Russian military spokesman warned foreign fighters who were “committing sabotage and raids on Russian convoys of equipment and material supplies, as well as aircraft covering them.” with Western weapons will not be given Prisoner of War Status if captured.

Russian MoD have confirmed that 496 soldiers were killed in action and a further 1,600 wounded in action in one week of the demilitarisation and denazification of Ukraine.