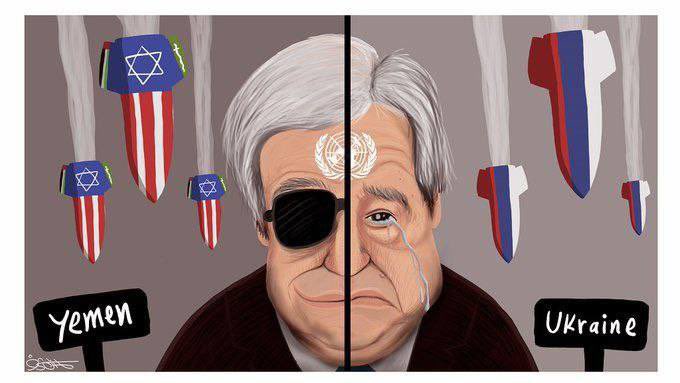 Use of Ukrainian flags, the words “war or “invasion” forbidden then rescinded after press report

On Tuesday in New York, the United Nations Department of Global Communications emailed staff, instructing them not to refer to the situation in Ukraine as a “war” or “invasion”. The instructions also forbade placing of Ukrainian flags to personal or official social media accounts or websites.

In the email seen by the Irish Times, UN staff were reminded of their “responsibility to be impartial.”

The UN instructions reportedly set out “some specific examples of language to use/not use at the moment.”

“[Use] ‘conflict’ or ‘military offensive’ and NOT ‘war’ or ‘invasion’ when referring to the situation in Ukraine,” the email apparently read, before warning employees: “Do NOT add the Ukrainian flag to personal or official social media accounts or websites.”

“This is an important reminder that we, as international civil servants, have a responsibility to be impartial … there is a serious possibility of reputational risk that has been flagged by senior officials recently.”

The UN Spokesperson Twitter account initially described The Irish Times’ reporting as “fake”, before deleting the tweet. This comes as fears grows that the UN doesn’t want to offend Russia a permanent member of the Security Council.

In Russia the media regulator Roskomnadzor have instructed Russian media houses to use the word “special military operation” and not “war” or “invasion” or risk a fine or censorship. Russian media outlets have been avoiding use of such terms as “assault,” “invasion,” or “war,” using either the Kremlin’s terminology or the politically neutral and factually correct “military offensive” instead.

UN spokesman Stéphane Dujarric acknowledged the email was sent but denied it was official policy. “I don’t dispute the validity of that email but it can not be considered official policy to staff.”

In a later development after the Irish Times report. Another email seen by the Irish newspaper suggests that   the language policy regarding Ukraine was updated which rescinded the initial guidance and allow for the use of “war” and “invasion”.