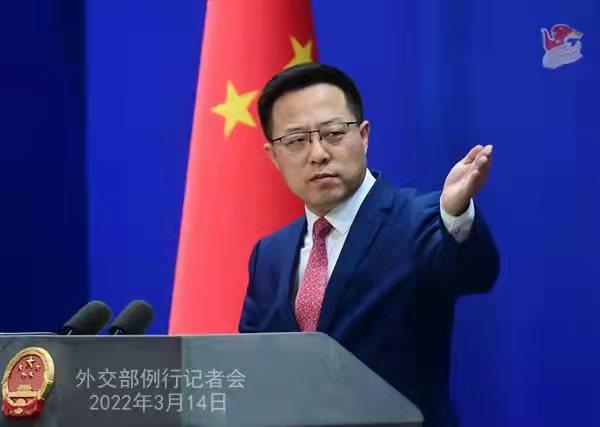 Calls on US to clarify its military bio labs in Ukraine

The Chinese foreign ministry spokesman Zhao Lijian said Monday that the US was spreading disinformation following reports that Russia was seeking military assistance from China.

“The allegations on the matter disseminated by the US are false information,” the diplomat said. “Currently, it is essential that all sides exercise restraint, contribute to defusing the situation, and not add fuel to the fire, [but rather] promote a diplomatic settlement of the issue and not its escalation.” The diplomat noted Chinese’s position on the Ukrainian crisis.

On Sunday the Financial Times published a report that Moscow asked China “for equipment and other kinds of unspecified military assistance” to support its offensive in Ukraine. The report added that the White House was worried “Beijing may undermine western efforts to help Ukrainian forces defend their country” if it chooses to approve the alleged request.

The allegations were then echoed through Western media establishments like the New York Times and CNN “Moscow asks for drones,” “sources declined to say what weapon systems Moscow seeks.”  Chinese Embassy spokesman Liu Pengyu told Reuters later on Sunday that he “had never heard of that [request],” and said China’s priority was “to prevent the tense situation from escalating or even getting out of control.”

During the Chinese foreign ministry press briefing Monday, China called on the United states to come clean on its biological weapons lab programme in Ukraine.

“If the US wants to prove the sincerity of its activities, why not open these biological laboratories for independent research by international experts?” he said. Military biological activities in Ukraine were of concern to the world.

“About 10 different laboratories operate on order from the US Department of Defence.” Lijian noted.

Russian MoD first alerted the world about the presence of US biological warfare labs in Ukraine after it began its special military operation. US Undersecretary of State for Political Affairs Victoria Nuland testified before Congress that Ukraine indeed had biological warfare labs with US support but was worried about Russia capturing the sites. Since her testimony the US has since denied involvement.