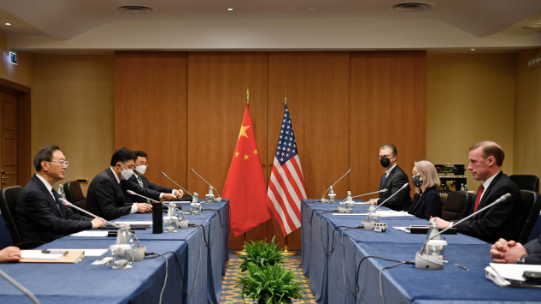 The United States was embarrassed at the diplomatic table in Rome on Monday as China flatly rejected the US stance on Ukraine.

Yang Jiechi Chinese Communist Party Politburo Member and Director of the Office of the Foreign Affairs Commission  met with Jake Sullivan the US national security adviser to discuss bilateral issues. The meeting which lasted eight hours and was described as tense according to Western media ended with an 80 word White house read out.

According to the Chinese Foreign Ministry, the two diplomats had “candid, in-depth and constructive communication” on bilateral ties and “the Ukraine issue, the Korean Peninsula nuclear issue, the Iran nuclear issue and the Afghanistan issue.”

The meeting between Sullivan and Yang was a follow on meeting to discuss progress of their bilateral relations since the last virtual meeting between Xi and Biden in November. In the virtual meeting during Xi proposed mutual respect, peaceful coexistence and win-win cooperation as three principles for developing China-U.S. relations in the new era.

President Joe Biden responded positively to China, saying that the United States does not seek a new Cold War or to change China’s system, nor will it oppose China through strengthening alliances, supporting “Taiwan independence,” or seeking confrontation with China.

China’s position on Ukraine was put on the spotlight and China refused to be bullied.

“All parties should exercise maximum restraint, protect civilians and prevent a large-scale humanitarian crisis.” Yang said, adding that China has provided emergency humanitarian assistance to Ukraine, and will carry on its efforts to this end.

He also stressed that China firmly opposes any words and deeds that spread false information, distort and smear China’s position.

On the Taiwan issue the top ranking Politburo member said. “The current US administration has pledged to adhere to the one-China policy and not to support “Taiwan independence” in regard to the Taiwan question, but its actions are obviously inconsistent with its statements.”

Wu Xinbo, dean of the Institute of International Studies at Fudan University, told the Chinese Global Times on Tuesday. “Although the Ukraine issue was a priority for the US during Tuesday’s meeting to pressurise China to take a stand, it seems that the attempt has been unsuccessful.”

“Not only did China’s position remain unchanged, but it also refuted rumors and false information that the US had been spreading. It means that the goal of the US for this meeting has failed.”