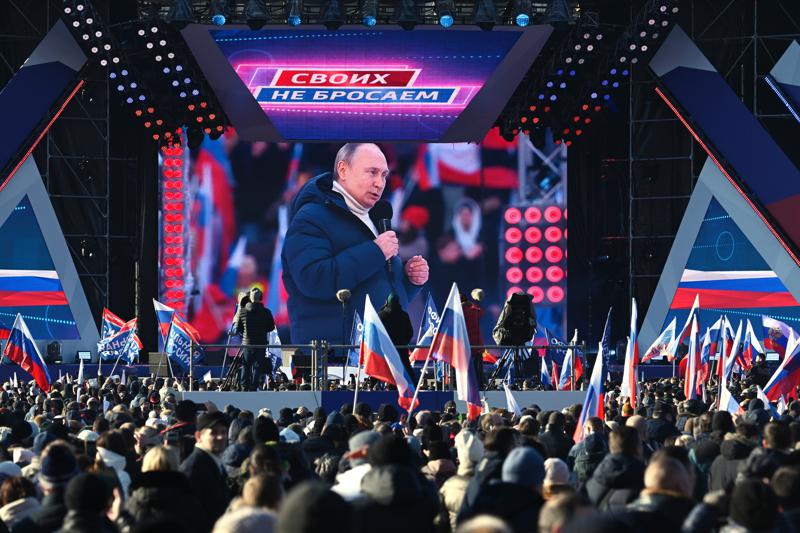 Over 200,000 people attended the rally according to Moscow Police

At the Luzhniki Stadium, site of the 2018 World Cup finals Friday, Russian President Vladimir Putin addressed a crowd of over 200,000 people on the eight anniversary of the re-unification of Crimea and Sevastopol with Russia.

Looking dapper in a white turtleneck sweater topped with a black puffer parka. Putin extolled the virtues of the Russian soldier fighting for freedom. “Shoulder to shoulder, they help and support each other, we have not had unity like this for a long time,” he added to cheers from the crowd.

The event felt like a rock concert and featured artists singing  patriotic songs, including a performance of “Made in the U.S.S.R.,” with the opening lines “Ukraine and Crimea, Belarus and Moldova, it’s all my country.” Portraying the war as just as the Great Patriotic War of 1939-45 in which Russia defeated the Nazis and captured Berlin, Putin quoted the Bible to say of Russia’s troops: “There is no greater love than giving up one’s soul for one’s friends.”

Some people, including presenters at the event, wore T-shirts or jackets with a “Z” — a symbol seen on Russian tanks and other military vehicles in Ukraine and flashed by supporters of the special military operation. Putin’s quoting of the Bible and an 18th-century Russian admiral reflects Russia’s focus in recent years on history and religion as a method to bind Russian society in an increasingly fractious world.