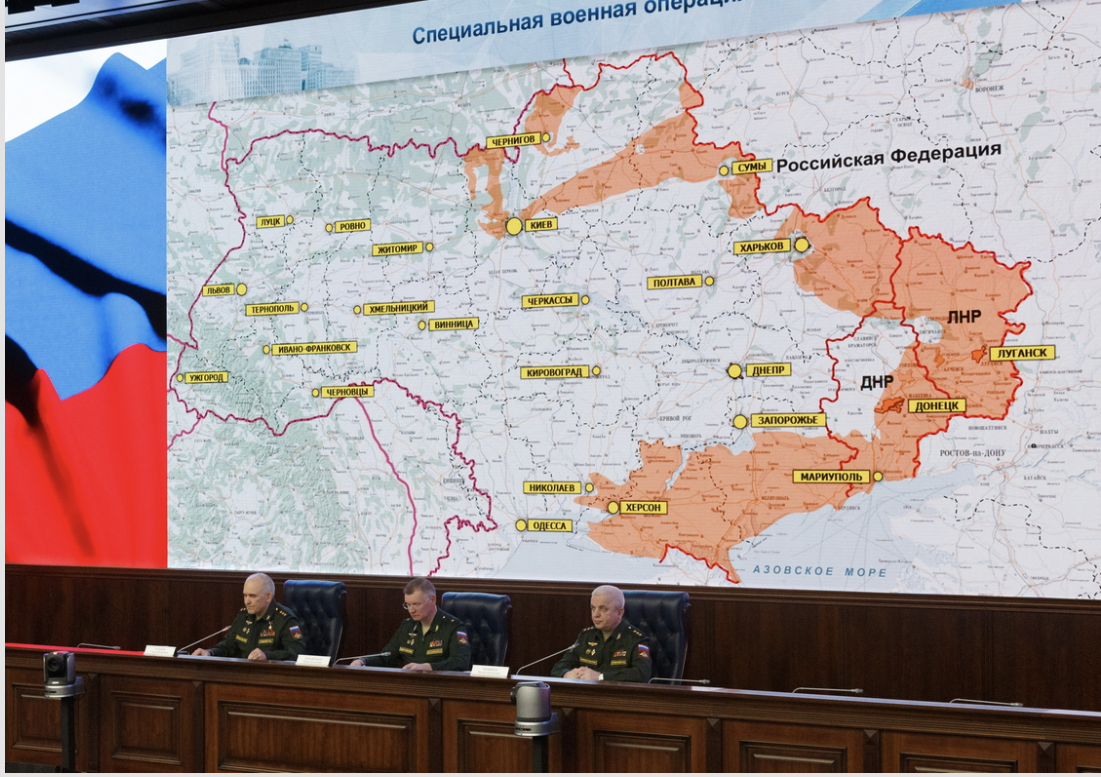 The Main Operational Directorate of the General Staff of the Armed Forces of the Russian Federation gave an update Friday on the progress of the operation which began on February 24.

At the Russian MoD building in Moscow, Colonel General Sergei Rudskoy the directorate chief gave a briefing in which he elaborated that Russian armed forces have completed phase one tasks set by the Supreme Commander in Chief. The priority task now was assisting the Donbass republics of Donetsk and Lugansk which had been under attack for eight years.

“Its main goal is to provide assistance to the people of the Lugansk and Donetsk people’s republics, who have been subjected to genocide by the Kiev regime for 8 years. It was impossible to achieve this goal by political means. Kiev has publicly refused to implement the Minsk agreements.” The colonel general said.

“The Ukrainian leadership twice in 2014 and 2015 tried to solve the so-called Donbass problem by military means, was defeated, but did not change its plans on resolving conflict by force in the East of the country. According to reliable data, the Armed Forces of Ukraine were completing the preparation of a military operation to take control of the territory of the people’s republics.” He added.

He then added that it was necessary for Russia to conduct the demilitarisation and denazification operation. “In these conditions, it was possible to help the Donetsk and Lugansk republics only by providing them with military assistance. Which Russia has done.”

According to the Russian general, the plan was on schedule.

“The tasks are carried out taking into account minimising losses among personnel and minimising damage to civilians. With the beginning of a special military operation, air supremacy was won during the first two days.”

Rudskoy then explained the Russian strategy. “Russian troops blocked Kiev, Kharkov, Chernigov, Sumy and Nikolaev. Kherson and most of the Zaporozhye region are under full control.”

The purpose of the blockade was to prevent the Kiev regime from sending reinforcements to the Donbass.

“These actions are carried out with the aim of causing such damage to military infrastructure, equipment, personnel of the Armed Forces of Ukraine, the results of which allow not only to shackle their forces and do not give them the opportunity to strengthen their grouping in the Donbass, but also will not allow them to do so until the Russian army completely liberates the territories of the DPR and LPR.”

There was never any intention of storming Ukrainian cities so as to avoid civilian casualties. He said. Meanwhile he said Russian armed forces were achieving the demilitarisation task. Russian high precision strikes have hit Ukrainian military facilities, the air force and air defence ineffective and the Ukrainian navy has ceased to exist. According to Russian General Staff, foreign fighters were escaping from the battlefield heading towards Poland, Hungary and Romania with 285 of them leaving in the last seven days.

Now the fear among observers is that they don’t take the Stinger man portable air defence systems (MANPADS) and the Javelin anti-tank guided system (ATGM) home with them.

The Russian General Staff also admitted that 1,351 servicemen have been killed and 3,825 wounded.

The Russian MoD also confirmed that the special military operation will continue until all tasks given to it are completed.