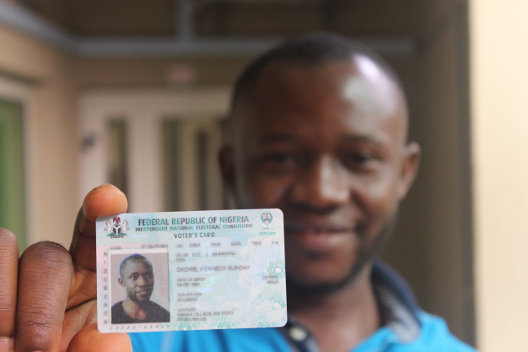 Nigeria’s Independent National Electoral Commission (INEC) has released a series of “sensitization” videos on social media urging Nigerians 18 years and above to get their Permanent Voters Card (PVC).

In January, INEC launched the Continuous Voter Registration (CVR) exercise aimed at Nigerians who are 18 years and above and whose names do not appear on the Voters Register (VR). The exercise now in its 11th week is devolved to ward levels all over the federation.

Eligible Nigerians were advised to enrol in the CVR at their local wards or go online and register at cvr.inecnigeria.org. After registration they should visit the INEC state or local government office for biometric enrolment which will include fingerprints and photograph capture. Any other category of voters who wished to replace, lost or damaged PVCs or correct wrong information were also advised to visit the CVR centres or register online.

Commentators are advising Nigerians to get registered and vote as it is the only way to change the system and for their voices to be heard. Also the erroneous belief that northerners control the politics of Nigeria is simple wrong but the political apathy of southern Nigerians. According to INEC data, the only way a southerner can get to Aso Rock without compromise is to get southerners to register.

Okey Bakassi a comedian and actor took to social media to challenge the apathy of Nigerians especially southerners in the electoral process.

He then went on to add. “The worst thing is that you even try to justify why you don’t have one ‘my vote won’t count.”

“For the sake of those who paid your school fees and fed you through school, please don’t make all your education/exposure useless with statements like that. If votes don’t count, politicians won’t bribe/pay people to vote for them. Go and get your PVC!” He stressed.