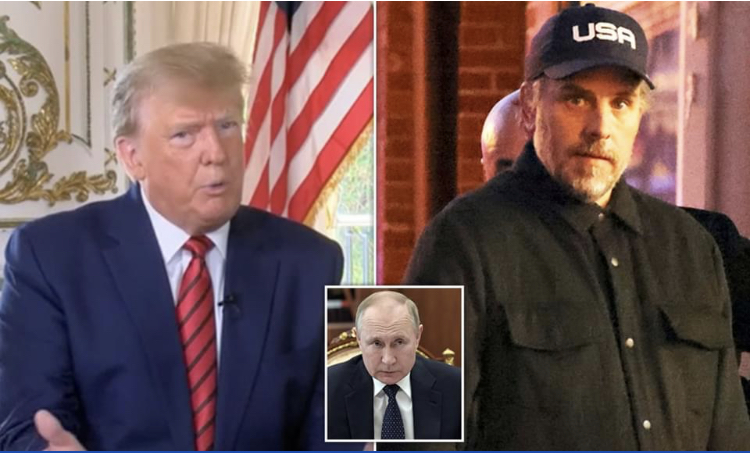 Former President of the United States and Republican front runner for 2024 Donald Trump has asked President Vladimir Putin of Russia for more “dirt” on his successor Joe Biden in a TV interview Tuesday night.

Appearing on the Real America’s Voice “Just the News” show, the former president returned to the accusations he hurled at Joe Biden during the 2020 presidential campaigns accusing Biden of corruption, claiming the mayor of Moscow’s wife gave Hunter Biden $3.5 million.

“That’s a lot of money,” he said. “She gave him $3.5 million so now I would think Putin would know the answer to that. I think he should release it.”

“I think we should know that answer,” he added.

Though the claims remain unsubstantiated there is still the Hunter Biden’s laptop which might prove Trump’ s claim that Biden received the funds from Elena Baturina, wife of the late Moscow mayor Yuri Luzhkov, in a bid to seek access to Joe Biden.

Earlier this month, Trump accused Biden of a ‘conflict of interest’ after the president was sanctioned by Moscow along with a host of other US officials, as well as his son Hunter and Hillary Clinton.

Trump was impeached by the House of Representatives in 2019 for trying to pressure Ukrainian President Volodymyr Zelensky into digging up what he alleged was compromising information on Biden’s son, who had once worked for the Ukrainian energy company Burisma. Over the last few weeks after the New York Times confirmed the Hunter Biden’s laptop story, emails relating to Burisma and a bio warfare tech company called Metabiota have surfaced.

On Monday the Wall Street Journal reported that prosecutors from the US attorney’s office in Delaware are interested in funds the first son received from the Ukrainian natural gas company Burisma and how he used that money to pay debts.