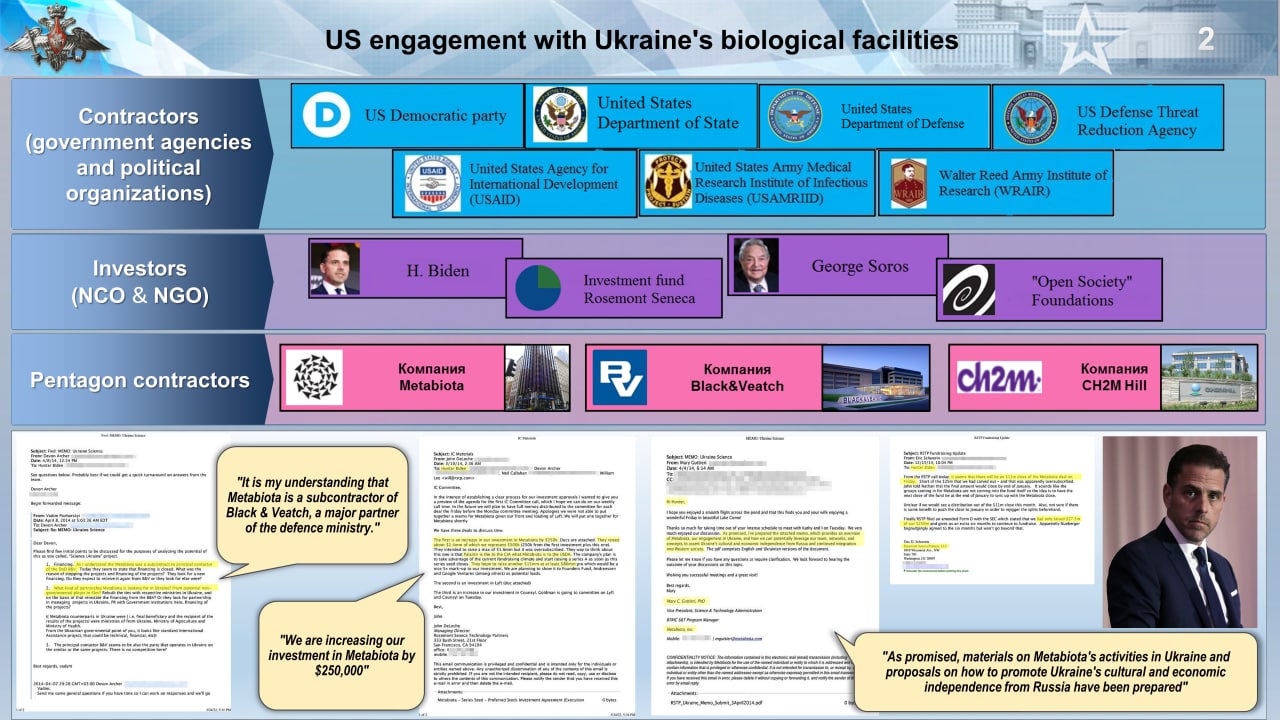 In a press briefing on Thursday in Moscow, the Russian MoD further revealed the Pentagon and Hunter Biden’s links to the secret Ukrainian bio-weapons programme. Hunter Biden was involved in financing biological activities in Ukraine as well.

The emails on Hunter Biden’s laptop verified by the New York Times and the Washington Post proved that the first son of the United States corresponded with the Pentagon and its contractors.

Hunter Biden in the emails provided hugh sums of money to two US corporations, Black & Veatch and Metabiota according to the Russians.

The Russians went further to accuse the US president’s son of colluding with the Pentagon not only in nefarious scientific activities they were also actively pursuing a cultural agenda. Which entails “… cultural and economic independence of Ukraine from Russia …”, are detailed in the slides presented at the briefing.

Two officials that facilitated the bio-warfare programme were named. Robert Pope a Pentagon official and director of the Joint Threat Reduction Programme (JTRP) whose objective was getting former Soviet republics involved in bio-warfare activities. In a letter to the Ukrainian Minister of Health Ulyana Suprun he thanked the US citizen who incidentally is the health minister for co-operating with the Pentagon.

Pentagon activities with Metabiota and Black & Veatch in Ukraine even drew concerns from Ukrainian security services. … “Recently, the potential threat of deterioration of the epidemic situation in our country has been actualized, due to the intentions of DTRA through the company Black and Veatch to establish control over the functioning of microbiological laboratories in Ukraine conducting research on pathogens of particularly dangerous infections that can be used to create or modernize new types of biological weapons …” The Ukrainian memo reads. The deadly pathogens were anthrax, Congo-Crimean fever and leptospirosis.

Evidence to prove that the Pentagon and Ukraine were planning to use bio-weapons, the Russians presented a US Patent letter which patented an unmanned aerial vehicle for the spread of infections in the air. The description of the patent states that with the help of this device, enemy troops can be eliminated or disabled without risk to US military personnel.

The Russian MoD spokesman Major-General Igor Konashenkov then drew attention to a a letter from Ukraine to the Turkish drone manufacturer Bayraktar dated 15 December 2021 requesting for drones equipped with 20 litres canisters. The drones with a range of 300 km could easily reach Russia to mount a biological attack.

All the plans were halted due to the Russian military operation in Ukraine which brought the bio-warfare programme to the world’s attention. The Russians also said that developing countries are used as testing grounds for biological weapons components and medicines.

“We believe that the incoming documents testify to the actual violation by the United States and Ukraine of obligations under Article 4 of the BWC and UN Security Council Resolution No. 1540 of April 28, 2004.” The Russian MoD spokesman added.