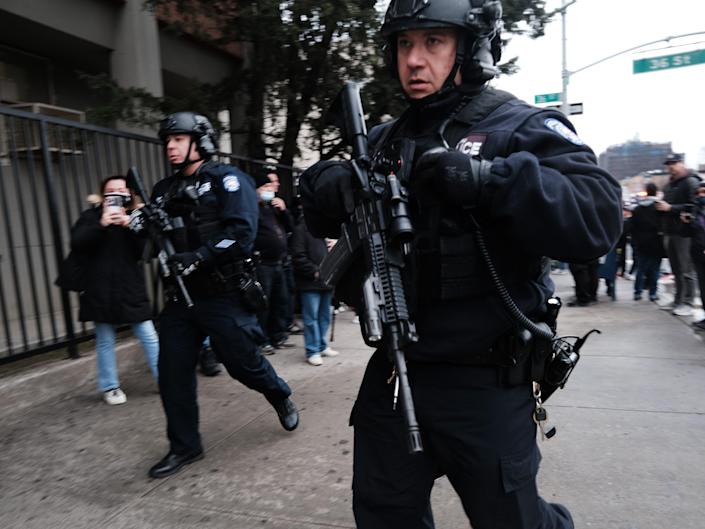 A suspected gunman who opened fire on a Brooklyn subway train during Tuesday morning rush hour is armed, dangerous and on the run according to New York Governor Kathy Hochul.

The attack in the 36th Street Station in the working class neighbourhood left 16 injured, 10 with gunshot wounds and five in a critical but stable condition according to New York City Police.

“We are asking individuals to be very vigilant and alert,” Hochul told reporters at the scene of the investigation. “This is an active shooter situation.”

Commissioner Sewell confirmed they were not investigating the incident as an act of terror at this time.

She also stressed that the suspect, a short, heavy-set black male wearing a green vest like construction workers wear, put on a gas mask and then removed a canister from his bag, opened it, and released smoke into the train car.

“He then opened fire, tracking multiple people on the subway and on the platform,” she added. Photos and videos posted to social media show bloodied victims spilling onto the platform and smoke hanging in the air.

New York City Mayor Eric Adams, who is in isolation with COVID-19 released a statement. “We will not allow New Yorkers to be terrorised, even by a single individual,” Adams said. “The NYPD is searching for this suspect at large and we will find him.”

The White House has been updated with the situation.

Since the pandemic New York City has seen a surge in violent crime and Mayor Adams was elected on his promise to reduce violent crime.