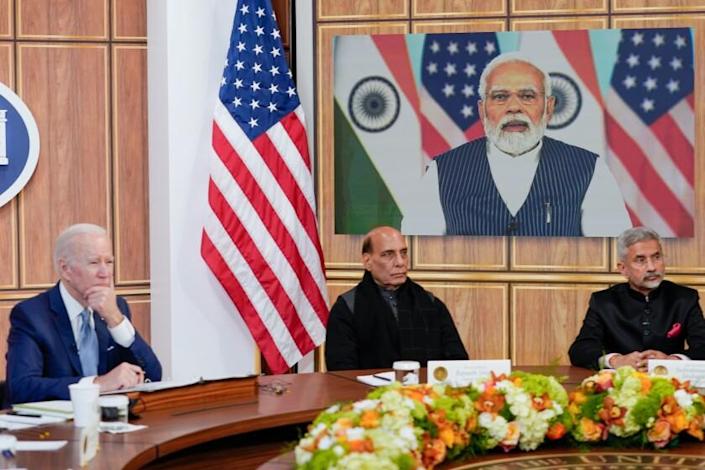 Mordi refuses to sanction Russia after virtual meeting with Biden

President of the United States Joe Biden held a virtual meeting with Indian Prime Minister Narendra Mordi on Monday to discuss sanctions on Russia. It was an unsuccessful attempt as the Indian position in regards Russia did not change. India is the only QUAD nation apart from the US, Australia and Japan that has refused to strangle the Russian economy.

Biden praised India on the basis that they were the two largest democracies on the planet and Mordi responded they were “natural allies.”

A Biden official who spoke to the press said the meeting between the two leaders was a “candid exchange of views” on the war in Ukraine, but that there was “no concrete ask, no concrete response.”

According to the the 153 word White House readout after hours lobbying the Indian leader the two leaders discussed clean energy, technology and military co-operation to counter China in the Indo-Pacific region. They also committed to ending the Covid 19 pandemic strengthening global food supplies and health. The “destabilising impact” of Russia’s war in Ukraine was discussed and its impact on the global food supply chain.

Regarding the alleged Russian massacre in Bucha. The Indian Prime Minister noted.”Recently, the news of the killings of innocent civilians in the city of Bucha was very worrying.”

Modi said during a brief part of the meeting open to journalists. “We immediately condemned it and have asked for an independent probe.”

India a key Russian ally had bought 13 million barrels of oil from Russia already using rupees-rubles mechanism and intends to buy more commodities from Russia. It has also abstained from UN votes condemning Russia. India relies on fertiliser and other food items from Russia to feed its 1.4 billion people because according to Vikram Singh, an Asia expert at the U.S. Institute for Peace, a Washington think tank.

“Higher energy prices don’t just mean $5 a gallon at the gas pump — they mean food insecurity and hunger for millions of Indians.” he said.

“Indians are just as horrified as anyone, but India is a poor country,” Singh said. “Taking the risk of burning relations with Russia has no real upside.”

India’s External Affairs Minister Subrahmanyam Jaishankar, at a later press conference when pressed on reducing Indian demand for cheap Russian energy in order not to sabotage US efforts to apply economic pressure on Russia said. “The focus should be on Europe, not India. “Probably our total purchases for the month would be less than what Europe does in an afternoon.”

The two leaders then hoped to meet at the QUAD summit in Tokyo, Japan in May.