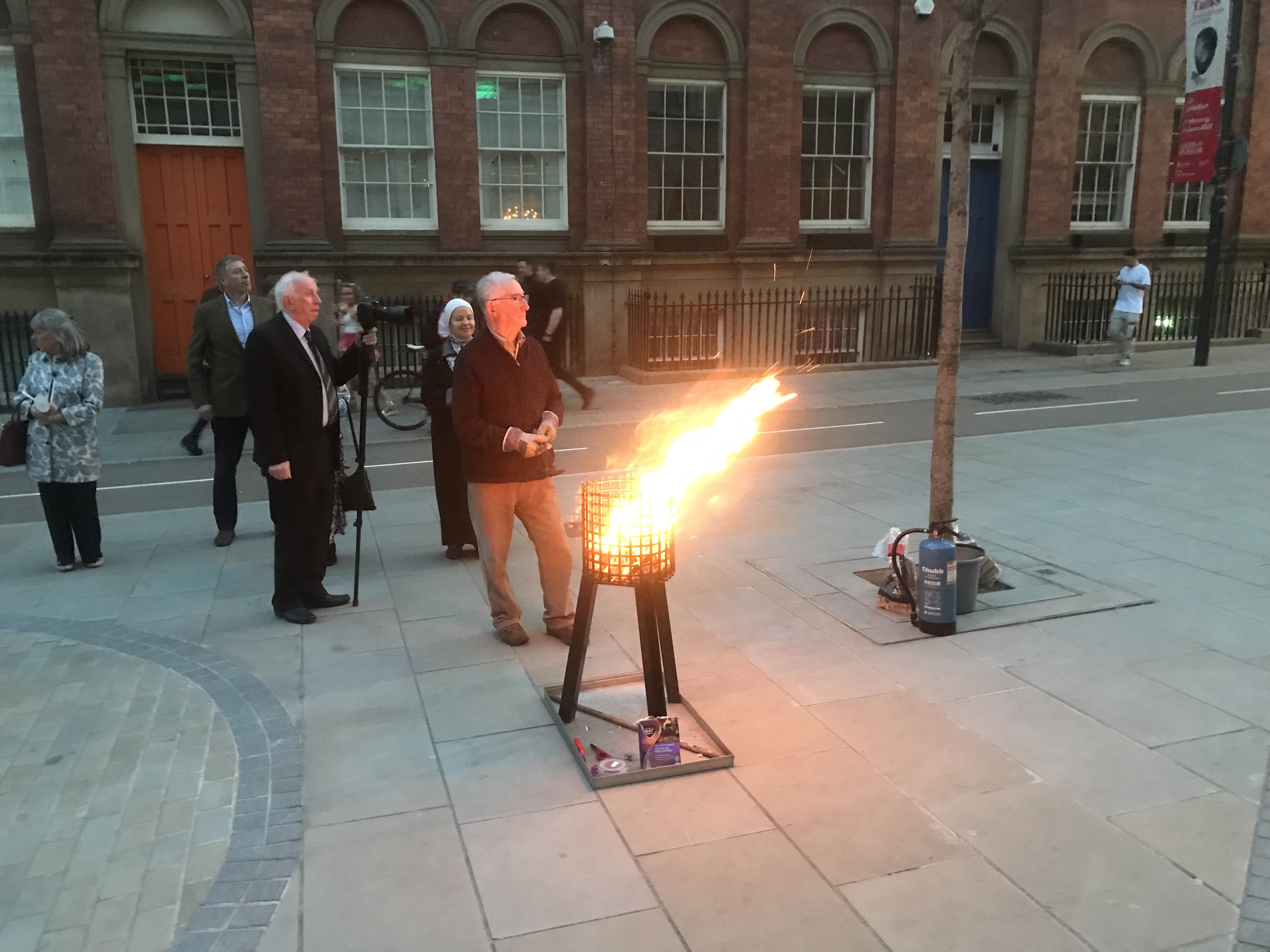 The Significance of the Easter or Paschal Candle

The origin of the word Paschal comes from the Latin word Pascha, which came from the Hebrew word Pesach, which in Hebrew means ‘Passover’, So for those of us who think Easter or Paschal is rooted in paganism you are wrong. As you can see it is a Jewish festival celebrating the Passover which is described in the Book of Exodus as the event where the Lord rescued the Jews from the land of Egypt. Easter a modern English term is derived from the old Anglo Saxon word Eostre or Eastrun. St Bede monk and father of English history provides the only documentary source for the etymology of the word, in his eighth-century The Reckoning of Time. He wrote that Ēosturmōnaþ (Old English ‘Month of Ēostre’, translated in Bede’s time as “Paschal month”) was an English month, corresponding to April, which he says “was once called after a goddess of theirs named Ēostre, in whose honour feasts were celebrated in that month.” It should be noted that Easter in other cultures is called Resurrection Sunday.

Now before the Paschal Candle is lit there must be an Paschal fire notice we are using the Latin word here. The origin of the Paschal fire is claimed to be related to an old Anglo Saxon tradition The Saxons probably believed that around the time of Easter, Spring becomes victorious over Winter. The fires were supposed to help chase the darkness and winter away. But a more appropriate origin could be in the legend of St Patrick who decides to light a bigger fire than the pagan Irish king’s fire honouring Balor the god of light. Soldiers sent by the king could not put out the fire of St Patrick which was lit  before Easter of 432AD. The fire is symbolic of the undimmed light of Christ despite the pagan king’s attempts to put it out and marked the beginning of the conversion of Ireland to Christianity. This fire reminds Christians of the Eternal High Kingship of Christ. Nevertheless it is rooted in the biblical “pillar of fire to give them light.”

The liturgical reforms of Pius XII of 1955 made lighting of the Paschal fire just after sunset on Holy Saturday just before the Easter Vigil. All candles and lights have been extinguished after Maundy Thursday to represent a dark world with Christ. The first use of Paschal candles was recorded by St Eusebius (De Vita Constantini, IV, xxii) in the 4th century, that the emperor Constantine who legalised Christianity through out the Roman world “transformed the night of the sacred vigil into the brilliancy of day, by lighting throughout the whole city pillars of wax (kerou kionas), while burning lamps illuminated every part, so that this mystic vigil was rendered brighter than the brightest daylight”. The Paschal Candle symbolises the risen Christ who is the Light of the world dispelling sin and darkness from the world. On the Paschal Candle is a cross to show that it represents Christ, the Greek Letters Alpha and Omega and the year 2022. The reason Greek letters and the year are inscribed is, because Christ is the beginning and the end of all things and all Time and Ages are under his dominion. Finally five grains of red incense to symbolise the five wounds of Christ. Two hands, two feet and the spear to his Heart. According to the Council of Trent 1545–63 The seven sacraments Holy Orders, Matrimony, Extreme Auction, Penance, Holy Eucharist Confirmation and Baptism flow from the five wounds of Christ. The Priest lights the Paschal Candle from the Paschal Fire and takes it in procession to the darkened church where other candles are then lit from the Paschal Candle. The Exsultet or Paschal Proclamation is then chanted by the priest.

On this, your night of grace, O holy Father, accept this candle, a solemn offering, the work of bees and of your servants’ hands, an evening sacrifice of praise, this gift from your most holy Church. But now we know the praises of this pillar, which glowing fire ignites for God’s honor, a fire into many flames divided, yet never dimmed by sharing of its light, for it is fed by melting wax, drawn out by mother bees to build a torch so precious. O truly blessed night, when things of heaven are wed to those of earth, and divine to the human.

Therefore, O Lord, we pray you that this candle, hallowed to the honor of your name, may persevere undimmed, to overcome the darkness of this night. Receive it as a pleasing fragrance, and let it mingle with the lights of heaven. May this flame be found still burning by the Morning Star: the one Morning Star who never sets, Christ your Son, who, coming back from death’s domain, has shed his peaceful light on humanity, and lives and reigns for ever and ever.

The Pachal Candle is lit for the 40 days of Paschal tide near the altar until Ascension Day then is it extinguished and moved to the baptismal font where it is lit for baptisms and requiem masses.

Feature written by a Felastory correspondent

Bishop of Leeds says that life is a journey of triumph and suffering Christian faithful all over the world gathered...

The 40 Days preparation for Easter begins with fasting and penance Pope Francis absent at Santa Sabina Vatican Secretary of...

Pope Emeritus Benedict XVI pleads for forgiveness In a penitential letter written addressed to the faithful of the archdiocese of...