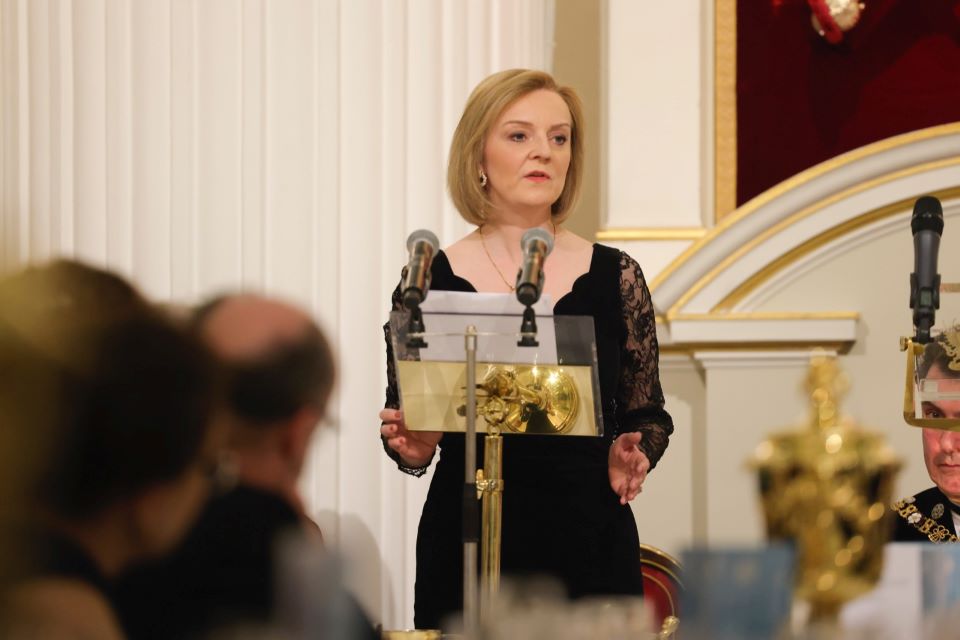 At the Mayor of London’s official residence Mansion House in London on Wednesday, the British Foreign Secretary Liz Truss laid out the British world order during the annual white tie Easter banquet.

In a speech which many analysts say is akin  to the Mansion House Speech of 1911 by David Lloyd George then Chancellor of the Exchequer, which warned the German Empire against opposing British influence in the lead up to the First World War. She warned that the world order created by the end of the Second World War and the Cold War has collapsed and called for a “global NATO.”

“My vision is a world where free nations are assertive and in the ascendant. Where freedom and democracy are strengthened through a network of economic and security partnerships,” Truss said in the speech.

She then called on the United Nations to be scrapped and replaced by a “Network of Liberty” because the economic and security structures developed after 1945 – such as the UN Security Council – “have been bent out of shape so far, they have enabled rather than contained aggression.”

“Russia is able to block any effective action at the UN Security Council. Putin sees his veto as a green light to barbarism. He’s walked away from the NATO-Russia Founding Act and the Treaty on Conventional Armed Forces in Europe. He’s violated multiple measures on arms control. The G20 can’t function as an effective economic body while Russia remains at the table.” She then went on to call the Russian President a “desperate rogue operator with no interest in international norms.”

“We need a global NATO. By that I don’t mean extending the membership to those from other regions. I mean that NATO must have a global outlook, ready to tackle global threats. We need to pre-empt threats in the Indo-Pacific, working with our allies like Japan and Australia to ensure the Pacific is protected. And we must ensure that democracies like Taiwan are able to defend themselves.”

In a direct challenge to China, she warned that China must play by international rules or else face sanctions.

“Beijing has not condemned Russian aggression or its war crimes. Russian exports to China rose by almost a third in the first quarter of this year. They have sought to coerce Lithuania. They are commenting on who should or shouldn’t be a member of NATO. And they are rapidly building a military capable of projecting power deep into areas of European strategic interest. But China is not impervious. By talking about the rise of China as inevitable we are doing China’s work for it. In fact, their rise isn’t inevitable. They will not continue to rise if they don’t play by the rules. China needs trade with the G7. We represent half of the global economy. And we have choices. We have shown with Russia the kind of choices we’re prepared to make when international rules are violated. ”

Calling the Ukraine war ” our war” she argued that “it is everyone’s war because Ukraine’s victory is a strategic imperative for all of us.”

She then went on to endorse more blood letting and destruction in Ukraine. “Heavy weapons, tanks, aeroplanes – digging deep into our inventories, ramping up production. We need to do all of this.”

“Geopolitics is back.” She added.

The United Kingdom has sent tons of weaponry in the past months to Ukraine like NLAW anti tank system and Stormer armoured vehicles. On Wednesday British Armed Forces Minister James Heappey told Thames Radio it would be “completely legitimate” for Ukraine to use UK-supplied weapons to strike into Russian territory, which got an immediate push back from the Russian MoD which said it will respond appropriately.

Captured by Donetsk Peoples Republic forces in the Donbas British fighter Andrew Hill advises other foreign fighters not to come...

Creeping UK government regulation causes market crash The Queen's Speech on Tuesday which sets the legislative agenda for the coming...

US President Joe Biden declares the start of the struggle against Russia and China At the Lockheed Martin Pike County...

Loss of grain exports will lead to food crisis in Europe Africa and Asia The Ukrainian Ministry of Agriculture has...