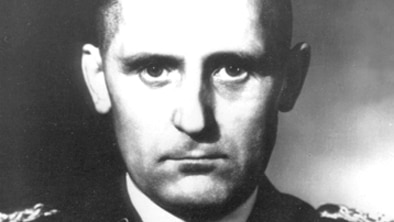 The mystery surrounding the final fate of the Gestapo chief SS Gruppenfuhrer Heinrich Muller was revealed Friday when the Russian Federal Security Bureau (FSB) in Moscow declassified some documents relating to the interrogation of Hans Baur the personal pilot to Nazi leader Adolf Hitler.

Muller is the only senior Nazi leader that did not appear before the war crimes tribunal at Nuremberg after the war.

Hans Baur who was also the commander of the Luftwaffe’s “Fuhrer Squadron” gave a witness report to what happened in the Fuhrerbunker beneath the Reich Chancellery in the final moments leading to Hitler’s suicide on 30 April 1945. The FSB’s public relations centre said in the disclosed documents that officers of the Soviet military counter-intelligence service SMERSH (the Russian acronym of Death to Spies) of the 1st Belarusian Front’s forces that were advancing into Berlin in the spring of 1945 had been given a special task to track down and arrest Hitler and other leaders of Nazi Germany.

SMERSH officers personally participated in the assault on the Reichstag and the nearby “Fuhrerbunker” – a fortified underground shelter where Hitler and Propaganda Minister Joseph Goebbels spent the last months of the war.  Among the documents are the handwritten testimonies of Baur which the Russians translated into Russian during interrogation at the NKVD of the USSR in December 1945.

“SS Gruppenfuehrer Müller told me on April 30, after Hitler’s death, that he, along with two other SD officers, would shoot himself,” Baur wrote. “For you, Baur, it makes sense to leave here as a pilot, you did not have to arrest or shoot anyone, and I was investigating the conspiracy (against Hitler) on July 20 (1944) and doing something else that I don’t I have the right to tell you” – so, according to the recollections of the former pilot, Muller told him he will shoot himself.

Before Hitler committed suicide, he invited Baur to his room and presented him with a portrait of Emperor Friedrich the Great by Rembrandt that was hanging on the wall. Baur tried to escape from Berlin after Hitler’s suicide but was injured on May 2 and taken prisoner by the Red Army. It was while in captivity that he learnt that Muller committed suicide with two of his aides.

In August 1945, a body in a general’s uniform was found in a temporary grave at Luftwaffe HQ. In the pocket was the official photo ID of Gruppenfuhrer Muller in the breast pocket. Ironically one of the attendees of the Wannsee Conference where the Final Solution to kill millions of Jews was planned and finalised was reburied in a Jewish cemetery. In 1963, the remains were exhumed three skeletons and one skull were found, but the corpse of Muller was not among them. Only half a century later, information appeared that Muller’s remains were not reburied at Lilientalstraße, but at a Jewish cemetery in the Mitte area.

The conspiracies then started. The head of foreign intelligence of the Third Reich, Walter Schellenberg, in his memoirs published after his death in 1956, stated that Muller did not die in 1945, but was recruited by the NKVD and lived in the USSR. a German prisoner of war saw him in 1948 in Moscow. . In 1961, the deputy head of the Polish military counterintelligence, Lieutenant Colonel Michal Golenevsky, a Polish intelligence officer who defected to the United States, said that he had heard from Soviet leaders how, between 1950 and 1952, the Soviet secret services found Muller and took him to Moscow.

Other researchers suggested that he fled to South America after the war like other Hitler’s henchmen. In the 1990s, books like “Diaries” and “Recruiting Conversations” allegedly written by him were published in the United States and he said he was recruited by the OSS forerunner of the Central Intelligence Agency. He lived in America and died in 1982 in California. Another 3 volume “Gestapo Chief” a transcript of his interrogation by American intelligence officers in 1948 was published in 1998. But all the books turned out be probably hoaxes.

In 2013, Johannes Tuchel a German history professor said he found proof that Muller died in 1945 and was buried in a mass grave at Luftwaffe HQ then exhumed and buried in a Jewish cemetery. “From my point of view, all the mysteries around Heinrich Mueller are solved,” he said at the German Resistance Memorial Centre in the defence ministry in Berlin, where German officers who tried to overthrow Hitler in 1944 were executed. He re-examined evidence from a grave-digger after the war, in then communist East Germany, who remembered burying a man in a general’s uniform in Berlin-Mitte Jewish Cemetery in 1945. He then traced the photo ID and medals found on the body and cross-reference data from German intelligence and American intelligence archives.

Tuchel concluded that the Gestapo chief died in 1945 and traced the corpse to the 17th century Jewish cemetery where the Jewish philosopher Moses Mendelssohn was also buried. Since Jewish religious law forbids exhumations it would be very difficult to identify one body among the thousands buried there to really confirm if Muller was buried there.

“Legends don’t die and if someone says tomorrow he has seen Mueller in the Arctic, I won’t contradict it,” Professor Tuchel said at the time in 2013. “But historical study and speculation are very different things.”