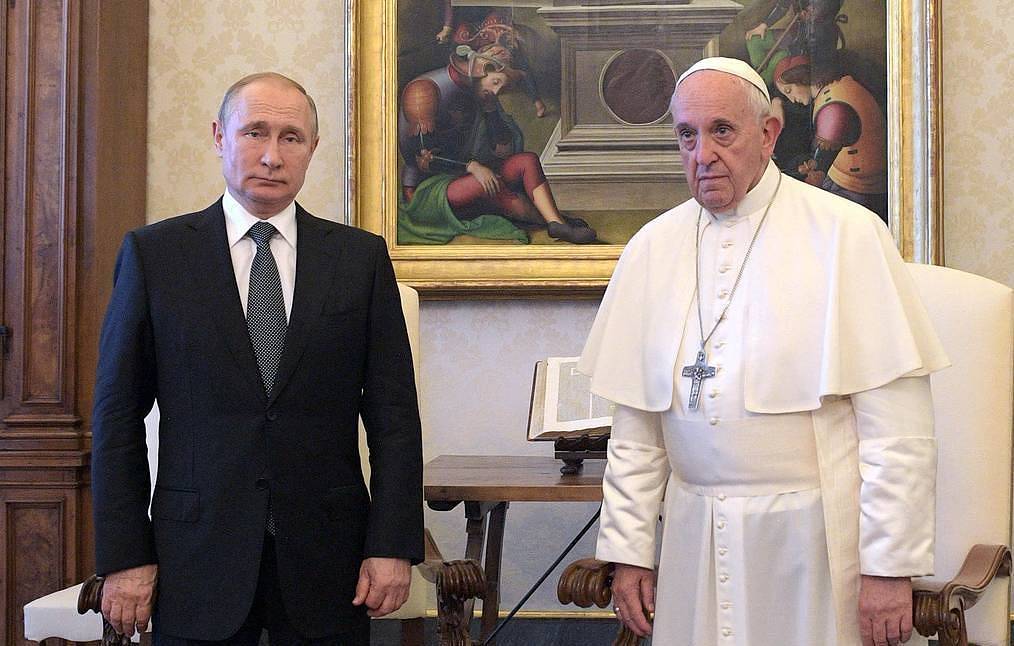 Pope Francis the head of the Catholic Church has said in an interview that the North Atlantic Treaty Organisation (NATO) expansion after the Cold War triggered Russia’s military operation in Ukraine.

In a Italian daily Corriere Della Sera interview published Tuesday, the pontiff speculated that “the barking of NATO at Russia’s door, that has led the Kremlin to react badly and unleash the conflict. I can’t say if it was provoked, but perhaps, yes,” he said.

The Roman pontiff also said he had requested a meeting with the Russian leader in Moscow through the Vatican secretary of state.

“I asked Cardinal Parolin, after twenty days of war, to send a message to Putin to say that I was willing to go to Moscow. We have not yet received an answer, and we are still insisting, even if I fear that Putin cannot and does not want to have this meeting at this time. But how can this brutality not be stopped? Twenty-five years ago we experienced the same thing with Rwanda.”

He talked about his conversation with Patriarch Kirill head of the Russian Orthodox Church on the war in Ukraine. “I listened and I told him: I completely fail to understand this. Brother, we are not state clerics; we cannot use the language of politics, but that of Jesus. We are pastors of the same holy people of God. That is why we must seek ways of peace, stop the fire of arms. The Patriarch cannot become Putin’s altar boy. I had a meeting scheduled with him in Jerusalem on 14 June. It would have been our second face-to-face meeting, nothing to do with the war. But now even he agrees: ‘Let’s wait; it could be an ambiguous signal’.”

The Pope insisted that he will rather visit Moscow that Kiev. “I am not going to Kiev for now; I feel that I must not go. First I must go to Moscow. First I must meet Putin. But I am also a priest, what can I do? I do what I can. If Putin would only open the door…”

In other developments the Ukrainian Air Force which has barely any combat aircraft left after being destroyed by Russian Aerospace Forces has admitted that the “Ghost of Kiev” who was said to have shot down over forty Russian aircraft and was celebrated in western media was a hoax. The admittance comes after the Times of London identified the “Ghost of Kiev” as Major Stepan Tarabalka who was killed in combat March 23.

Kiev had released aerial combat footage saying “Ghost’ dominates the skies over our capital and country, and has already become a nightmare for invading Russian aircraft.” The combat footage was later discovered to be a rip off from an air combat simulation. Caught in a vortex of lies the Ukrainian military to to social media calling on users to authenticate any battle information; “check the sources of information before disseminating it.”

“Hero of Ukraine Stepan Tarabalka is NOT the ‘Ghost of Kiev’ and he did NOT hit 40 planes,” the air force said addiing “The Ghost of Kiev is a superhero-legend whose character was created by Ukrainians!”

On Tuesday the Russian Ministry of Defence confirmed that high precision supersonic Oniks missiles destroyed a western weapons depot near Odessa. “A hangar with Turkish-made Bayraktar TB2 combat drones along with weapons from the US and Europe were destroyed, six military sites were hit by airstrikes overnight, including a fortified command center near Kharkov in eastern Ukraine.” Major -General Igor Konashenkov said.