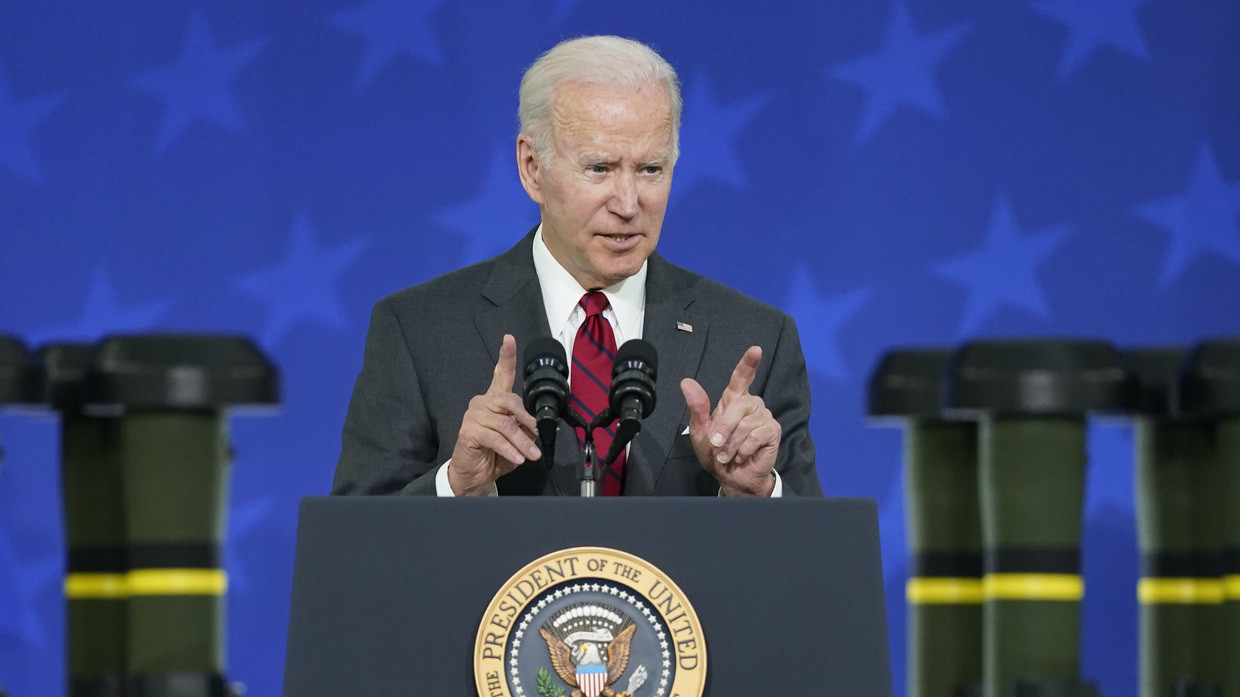 At the Lockheed Martin Pike County Operations in Troy, Alabama on Tuesday, President Joe Biden of the United States announced the beginning of the struggle against Russia and China; the continuation of the “clash of civilisations,” east vs west, democracy vs autocracy in a speech promising unprecedented military aid to Ukraine. The Lockheed Martin Pike operations manufactures the Javelin anti tank missile system that reportedly has devastated Russian armour forces.

“We’re at an inflection point in history, for real — it comes along about every six or eight generations — where things are changing so rapidly that we have to be in control.” Biden said to the assembled workers who responded with applause.

“Folks, there’s an ongoing battle in the world between autocracy and democracy.  Xi Jinping, the leader of China, who I’ve talked — I’ve spent more time with than any other world leader has — over 78 hours on the — either in person or on the telephone with him.” The self proclaimed leader of democracy then went to say what Xi the Chinese President told him.   “He says that democracies cannot be sustained in the 21st century.  Not a joke.  They cannot be sustained — because things are moving so rapidly, democracies require consensus, and it’s hard to get consensus, therefore they can’t keep up with an autocracy — one-man rule.”

Biden then said the United States will never allow autocracies to win because that will change the world. “But that’s not going to be the case.  If that happens, the whole world changes.”

Standing behind a row of Javelin missile launchers he thanked the workers for allowing the Ukrainians defend themselves against Russian aggression in the first battle of civilisations.

He also said that the billions of dollars sent to Ukraine was an investment “defending freedom and democracy.”

And for those who still doubt the existence of a military industrial complex, the US president elaborated on what the defence industry contributes to the American economy.

“As I said from the beginning, this fight is not going to be cheap, but caving to aggression would even be more costly. There’s something else here that — to be understand.  Being the arsenal of democracy also means good-paying jobs for American workers in Alabama and the states all across America where defense equipment is manufactured and assembled.

“Two hundred and sixty-five people here at this plant are directly employed working on the Javelin program.  All told, Lockheed Martin has brought nearly 3,000 jobs to Alabama.” He stressed.

Ironically on the same day he was giving his speech the Chairman of the US Joint Chiefs of Staff General Mark Milley was on Capitol Hill justifying the over the 2023 $700 billion defense budget to senators, saying. “We are now facing two global powers, China and Russia, each with significant military capabilities, both who intend to fundamentally change the current rules-based [global] order.”

General Milley also mentioned the “inflection point.” calling for a tougher military strategy in countering Russia and China. “The United States is at a very critical and historic geo strategic inflection point. We need to pursue a clear-eyed strategy of maintaining the peace through the unambiguous capability of strength relative to China and Russia.”