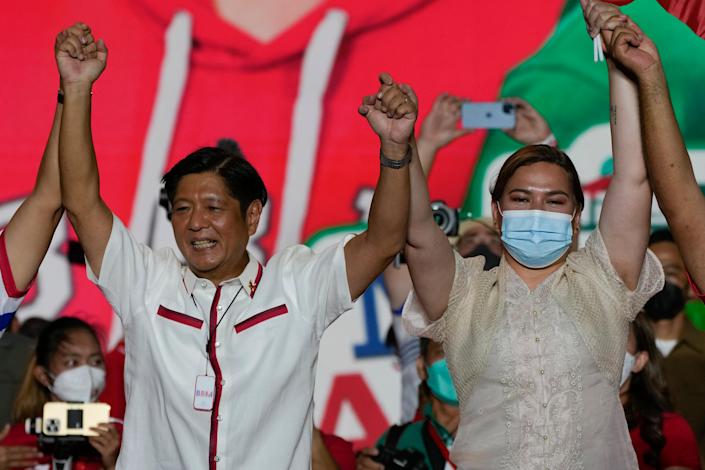 Marcos Junior wins in the Philippines

The son of the late Philippines dictator Ferdinand Marcos has won the Filipino presidential elections. Ferdinand Marcos Jnr, 64, shocked the world in a spectacular landslide electoral victory on Tuesday.

In a victory speech he vowed. “Judge me not by my ancestors, but by my actions,” in a statement by his spokesman Vic Rodriguez. Referring to his late father Marcos Snr who left power after a popular uprising in 1986. Accused of looting the Filipino treasury of billions of dollars after twenty years in power, the senior Marcos fled into exile with his wife Imelda who was accused of having 1,000 pairs of high heel shoes with matching handbags.

Marcos Jnr served as a congressman and a senator since the family returned from exile in Hawaii in 1991.

“This is a victory for all Filipinos, and for democracy,” spokesman Rodriguez said. “To those who voted for Bongbong, and those who did not, it is his promise to be a president for all Filipinos. To seek common ground across political divides, and to work together to unite the nation.”

Around 400 people, mostly students protested against Marcos outside the election commission on Tuesday, claiming the election was rigged in favour of a family synonymous with corruption. The former boxing legend Manny Pacquiao, who came third conceded defeat on Tuesday. “I hope even though I lost this fight, my fellow Filipinos and the poor are winners,” Pacquiao said on Facebook.

Many said Marcos Jnr won because he agreed to have the daughter of the outgoing president Rodrigo Duerte, Sara Duterte-Carpio as his running mate.

Marcos Jnr inherits a tense Indo Pacific region and might have to chose either the United States or China. He has a complicated relationship with US authorities over his refusal to co-operate over a $2 billion fund to compensate victims of his father’s rule.

As for China’s dispute over the South China Sea a strategic and mineral rich waterway which was awarded to Manila in a tribunal ruling, Marcos in several interviews agreed to discuss the issue with China.

“If you let the U.S. come in, you make China your enemy,” he told DZRH Radio. “I think we can come to an agreement (with China). As a matter of fact, people from the Chinese embassy are my friends. We have been talking about that.”