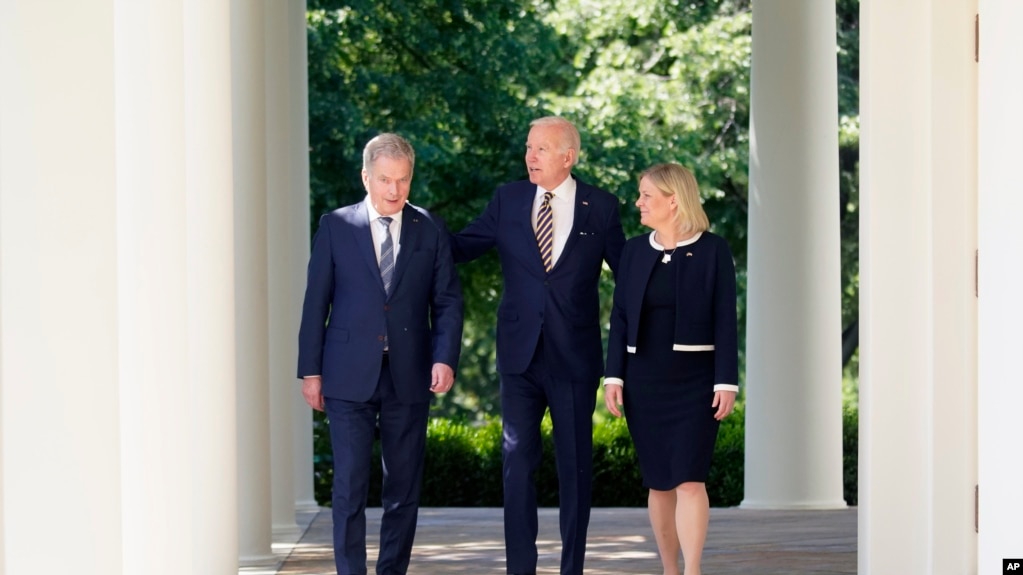 As Turkey says no to Swedish and Finnish NATO membership

At a Rose Garden ceremony at the White House, Thursday. President Joe Biden formally welcomed Sweden and Finland into the North Atlantic Treaty Organisation (NATO) just as the Turkish President Recep Tayyip Erdogan accusing them of giving a haven to “terrorists” and imposing sanctions on Turkey.

Flanked by Prime Minister Magdalena Andersson of Sweden and President Sauli Niinistö of Finland, Biden promised to send their NATO application forms to Congress where bi-partisan support will ensure a speedy approval. Their applications were submitted at the alliance headquarters in Brussels where NATO Secretary-General Jens Stoltenberg made the announcement about Sweden and Finland’s bids on Wednesday.

“Sweden and Finland have strong democratic institutions, strong militaries, and strong and transparent economies,” Biden said. “And a strong moral sense of what is right. They meet every NATO requirement, and then some.”

Also on Thursday Finnish Prime Minister Sanna Marin told an Italian newspaper while visiting Rome to meet her Italian counterpart said “There isn’t even interest (within NATO) to put nuclear weapons or bases in Finland,” Marin told daily Corriere della Sera, according to her office.

Turkey seems the only member willing to veto both countries bid. Erdogan has said in a meeting with Turkish youth. “At the moment we have the authority, since NATO’s [charter] requires the [consent] of the entire alliance. And if any country says no, they cannot admit anyone to NATO. At the moment, we are determined on these two countries. Especially Sweden, they are a center of terrorism, a hotbed of terrorism,” the Turkish president said.

On Wednesday at the Pentagon, U.S. Defense Secretary Lloyd Austin told his Swedish counterpart, Peter Hultqvist, “We look forward to your contributions to the NATO alliance.”

“This is a time when the democracies of Europe and North America must stand together against Russia’s naked aggression,” Hultqvist said.

On Monday while speaking at the CSTO summit, Russian President Vladimir Putin stated that Moscow would respond to NATO military bases in the territory of the two countries. However, NATO’s expansion to Finland and Sweden does not pose a direct threat to Russia, since Moscow has no problems with those states, he added.