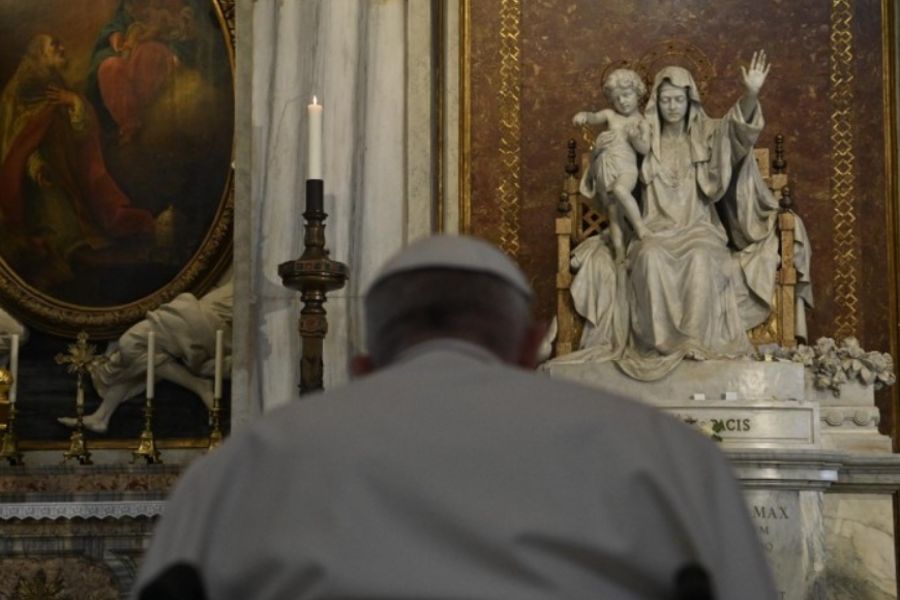 The Supreme Pontiff of the Roman Catholic Church, Pope Francis led an international day of prayer for peace in Ukraine and elsewhere affected by war at the Basilica of St Mary Major in Rome, Tuesday.

On the feast day of the Blessed Virgin Mary Queen of Peace marking the end of May a month which is dedicated to Our Lady, the 85-year-old pope prayed before the statue of Mary Queen of Peace. Regina Pacis, in the basilica’s left aisle. The marble statue was commissioned by Pope Benedict XV to ask for the Virgin Mary’s intercession to end the First World War. The sculptor Guido Galli sculpted Mary with her left arm raised, commanding the war to end, and in her right arm, she holds the Child Jesus, who is poised to drop an olive branch symbolising peace.

Before praying the rosary, a bouquet of white roses was placed at the feet of the statue. Francis asked Mary, who in Christianity is revered as the Mother of God, to “reconcile hearts that are full of violence and vendetta”. Marian shrines around the world joined in the global prayer by video link.

“This evening, at the end of the month especially consecrated to you, here we are again before you, Queen of Peace, to beseech you: Grant the great gift of peace; end the war soon which has been raging for decades now in various parts of the world and which has now invaded the European continent, as well.”

“We are aware that peace cannot be the result of negotiations alone nor a consequence of political agreements alone, but is, above all, an Easter gift of the Holy Spirit.”

“Today we raise our hearts to You, Queen of Peace: Intercede for us with your Son; reconcile hearts filled with violence and vengeance; straighten thoughts blinded by the desire for easy enrichment. On all the Earth may your enduring peace reign.” He prayed. About 900 people attended the service at the basilica including senior Vatican cardinals, Swiss Guards and refugees.

The Pontiff who has a knee problem sat in a wheelchair and later greeted children who had recently been baptised or received the sacrament of confirmation, as well as families from Rome’s Ukrainian community.