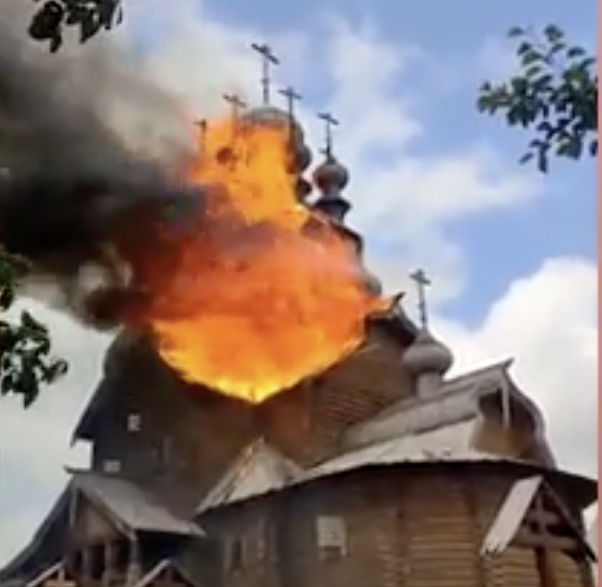 The Russian Ministry of Defence says that retreating Ukrainian nationalists have set fire to the wooden monastery of the Moscow Patriarchate All Saints of the Land of the Russian Holy Dormition Svyatogorsk Lavra in the Donetsk Peoples Republic (DPR).

“According to the local residents, the wooden walls under the dome were shelled by incendiary munitions from a high-caliber machine gun mounted on a Kozak Ukrainian armoured vehicle. After commiting the arson, the Ukrainian nationalists headed southbound at a high speed, towards a Ukrainian troops-contolled locality of Sviridovo.” The RuMOD statement read.

Russia has denied Ukrainian statements blaming the attack on Russian aviation. “Units of the Russian Armed Forces that were to the north of Svyatogorsk do not carry out any combat operations in this area and do not shell the territory of the historical and architecture reserve of Svyatogorsk.” A statement from the Russians read.

Russian missiles destroyed a western training facility near Dachnoye, Odessa Region. While air defence missiles shot down a Ukrainian Air Force plane that was transporting armament and ammunition near Odessa.

“Ukrainian Armed Force’ units are retreating towards Lisichansk after suffering critical losses (up to 90% in various units) during the combats for Severodonetsk. The authorities in Kiev have ordered the combined tactical group to plant saltpetre and nitric acid tanks of a volume above 100 tonnes at Azot entity located in Severodonetsk.” The RuMOD stated accusing the Ukrainian forces holed up in Azot of planning a chemical attack which they will blame on Russian forces.

In the 101st day of the Russian military operation to “denazify” and “demilitarise ” Ukraine. The Kiev regime has lost 187 airplanes, 129 helicopters, 1,104 unmanned aerial vehicles, 328 anti-aircraft missile systems, 3,406 tanks and other armored combat vehicles, 466 multiple launch rocket systems, 1,769 field artillery and mortars, as well as 3,405 units of special military vehicles according to Russian data.