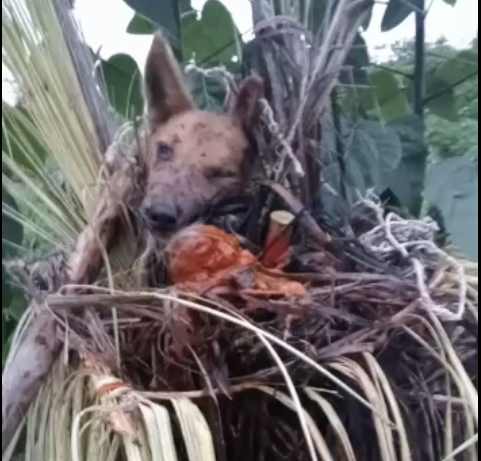 Two corgis were offered as prayers for the Queen of England

An Ifa priest in Ogun State Nigeria has offered two corgies as offerings to Ogun (Yoruba Icon of Iron, Progress and War), Sunday, to ensure that the Queen of England Elizabeth II who is celebrating her Platinum Jubilee to have another 70 years on the throne.

The “Father of Mysteries” known in the Yoruba language of western Nigeria as “babalawo”, Ifatosin Ifasola of Remo Yorubaland West Africa said the offerings were done to ensure that the Cosmic powers enable Her Majesty live a “Happy and glorious” life and “Long to reign over us,” as the English national anthem states.

English-Yoruba relationship. The Alake of Egbaland is seen coming out from his vintage car for the coronation of King George VI, Elizabeth’s father in 1937.

The offering ceremony which lasted an hour began at sunset at the Ogun sacred altar in the palace of the Araba who is the head of the babalawos in the district. Chanting in the Yoruba language he prayed that Ogun should clear all obstacles, make the pathways free from unnecessary traffic and for world peace.

At the end of the Yoruba liturgy the priest and the worshippers had a feast of grilled dog meat with palm wine in honour of the Queen. Observers note that the connection with the English Crown began when England ended slave trade, repatriated slaves from Freetown to Abeokuta present day Ogun state and stopped the Yoruba Civil War. So this offering was a thank you gesture from the Yorubas who are continuing the traditions of their forefathers.

Speaker of State Duma says move is stop the spread of western darkness in Russia and defend traditional values Russia’s...