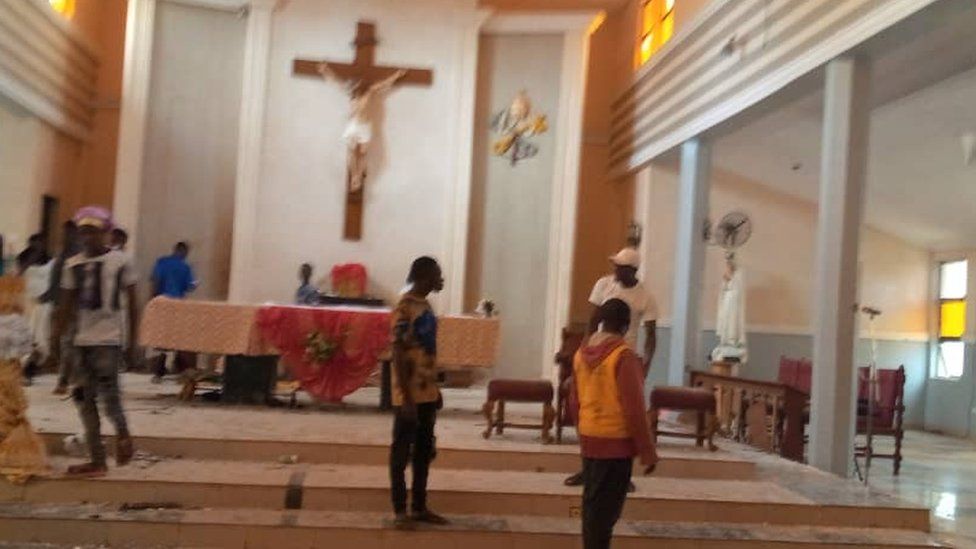 Over 50 Christians martyred in terror attack

Suspected terrorist gunmen stormed the Saint Francis Catholic Church in Owo while the faithful were celebrating the birthday of the Church, Sunday killing over 50 people including women and children.

The attack happened on Owa-luwa Street, in Owo Local Government Area of Ondo State. According to Ondo State Police Command spokesperson SP Odunlami Funmilayo, an unknown number of terrorists approached the church at about 11.30am, opening fire outside the church while four entered the church opening fire on the worshippers.

Earlier reports had suggested that a bomb detonated inside the church that the Commissioner of Police CP Oyeyemi Oyediran had to deploy Explosive Ordinance Device (EOD) teams to the scene of the incident. But initial on scene investigation according to police involved no explosive device.

“Preliminary investigation revealed that the assailants approached the church during the service, started shooting from outside the church while others numbering about four shot directly into the church.” The police statement read.

Ondo state residents were assured by the police command that a forensic investigation was underway to catch the culprits who all escaped after the shooting.

“The CP has equally ordered Forensic Investigation into the attack to ascertain the actual or remote cause(s) of the attack and for immediate arrest of the assailants as all hands are deck to forestall any similar attack in any part of the state.” The police spokesperson wrote.

Due to the high number of casualties, appeals for blood donations are making the rounds on social media. Donors are requested at all the specialist hospitals and the Federal Medical Centre in Owo.

A statement from the Presidential Villa Aso Rock Abuja signed by the media aide to the President Femi Adeshina said Buhari is saddened by the incident and commiserates with the victims, the Catholic Church and the people of Ondo State.

“Only fiends from the nether region could have conceived and carried out such dastardly act, adding that eternal sorrow awaits them both on earth here, and ultimately in the hereafter.”

Leader of the Ilana Omo Oodua Worldwide (IOOW) Professor Banji Akintoye called the attack an attack on Yorubaland and blamed Fulani herdsmen for the attack and called for a swift exit from Nigeria.

“We have stated it very expressly that the Yoruba people need to negotiate their exit from Nigeria as a matter of urgency but our Partisan Political Actors in Yoruba Land never took us serious. We warned them that there’s fire on the mountain but we were mocked because of their personal aggrandizement.”

“Today, we have all been encircled, most especially, in Lagos. For Herdsmen to have the effontery of bombarding a Church in Yoruba Land to kill about 85 people shows that we are now in a realistic danger.” the professor said.

Nigerian Labour Party presidential candidate for the 2023 elections Peter Obi wrote on Twitter. “What happened in Owo today again adds to my position that our country is fast becoming a failed state. All must now join hands in saving our country from this existential situation we find ourselves in today.”

All Progressives Congress (APC) Governor Rotimi Akeredolu of Ondo State called the attack on his hometown “vile and Satanic.”

The Catholic Bishop of Ondo Diocese Jude Arogundade in a press statement assured that neither the priests or himself were kidnapped and appealed for calm and prayers.

“The Bishop appeals that we remain calm, be law abiding and pray for peace and normalcy to return to our community, state and country.”