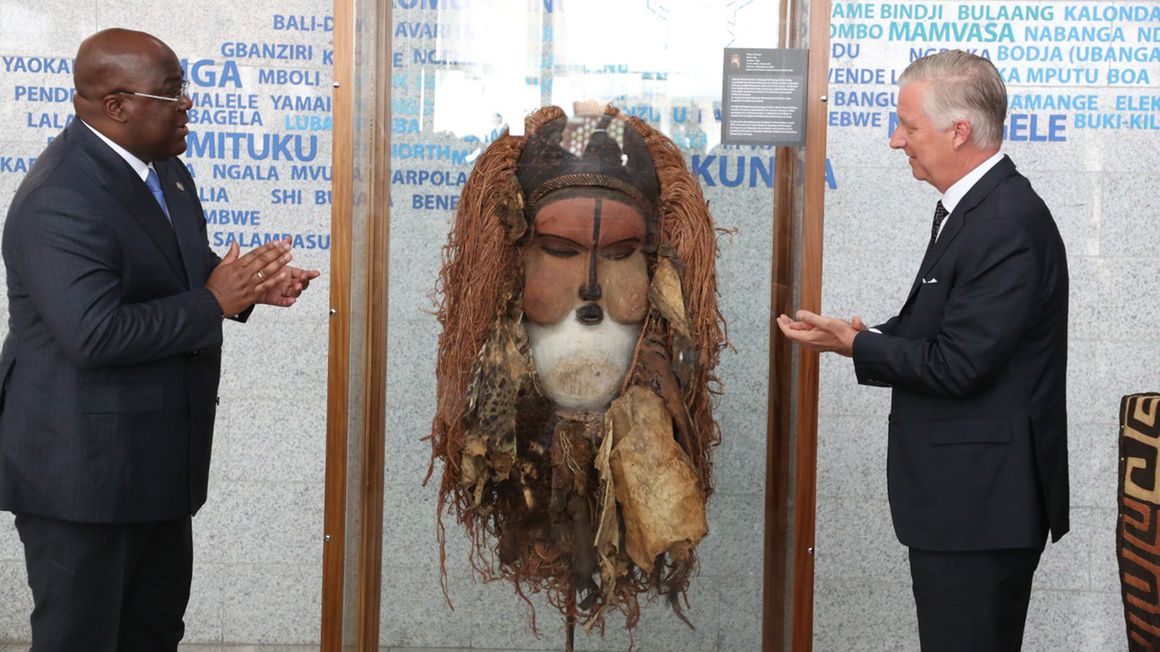 The King of Belgium, Philippe did not apologise to the Congolese people when he returned a stolen mask and Lumumba’s tooth while on an official visit to the Congo, Wednesday. He was received by the Congolese president Felix Tshisekedi and Kinshasa the capital was decked in Congolese and Belgian colours. Crowds of party supporters lined the streets waving Belgian flags and a banner outside parliament read “A Common History”.

The Belgian king became the first official since he became king in 2013 to state that the Belgian kingdom regrets its role in the rape of the Belgian Congo, two years ago. Many Congolese were expecting an apology on Wednesday but were disappointed when Philippe restated his deepest regrets for the exploitation, racism and brutality during the colonisation of the Congo stopping short of a formal apology.

“Even though many Belgians invested themselves sincerely, loving Congo and its people deeply, the colonial regime itself was based on exploitation and domination,” he said in a speech to a joint session of the Congolese parliament in Kinshasa.

“This regime was one of unequal relations, unjustifiable in itself, marked by paternalism, discrimination and racism,” he said.

“It led to violent acts and humiliations. On the occasion of my first trip to Congo, right here, in front of the Congolese people and those who still suffer today, I wish to reaffirm my deepest regrets for those wounds of the past.” Philippe said.

According to estimates, killings, famine and disease led to the deaths of 10 million Congolese during just the first 23 years of Belgium’s rule from 1885 to 1960, when King Leopold II ruled the Congo Free State as his personal estate.

Philippe arrived on Tuesday with his wife, Queen Mathilde, and Prime Minister Alexander De Croo for a week-long visit. A visit aimed at boosting Congolese healthcare and investment.

“We have not dwelled on the past, which is the past and which is not to be reconsidered, but we need to look to the future,” Tshisekedi said.

As a gesture of goodwill the Belgian king offered a traditional mask of the Suku people to Congo’s national museum as an “indefinite loan”. The mask has been held for decades by Belgium’s Royal Museum for Central Africa. Also the only surviving remains of the first prime minister of Congo Patrice Lumumba, a tooth will be given to his family.

The Belgian government in 2002 accepted responsibility for his murder by Belgian backed separatists in 1961.