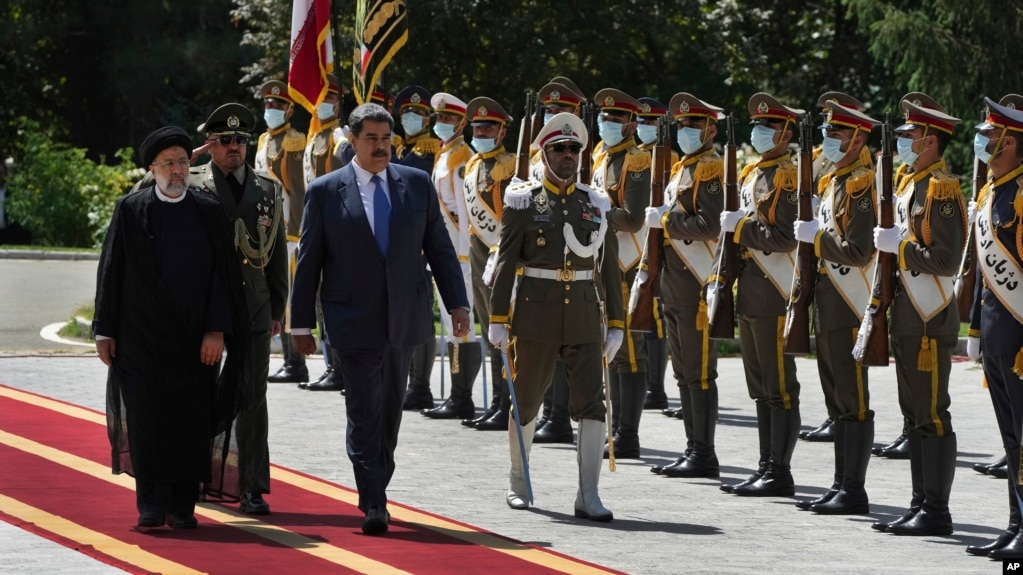 The President of Venezuela Nicolas Maduro and his Iranian counterpart Ebrahim Raisi have signed a 20 year strategic co-operation agreement, Saturday in Tehran the Iranian capital. Maduro on a two day visit to Iran praised the the Islamic Republic for sending badly needed fuel to his nation despite U.S. sanctions.

“Tehran’s delivery of oil to Caracas was a great help to the Venezuelan people,” he told Iranian state media.

Iranian President Raisi had invited the South American leader in the context of the the collapse of the Iranian nuclear deal, Western sanctions on both nations, rising food and fuel prices which are strangling the economies of both major oil producers.

At a joint press conference at the Saadabad Palace, Raisi and Maduro signed a 20-year agreement to cement ties in the oil and petrochemical industries, the military – allowing the Islamic Revolutionary Guards Corps Navy ships to make port calls- and the economy.

Maduro said both countries share a common vision on important global issues and countering Western sanctions on both countries. “We have agreed the need to well inform the Iranian and Venezuelan nations about the war of sanctions and find ways to counter them with steadfastness.”

In a meeting with the Supreme Leader of Iran Ayatollah Ali Khamenei, the Venezuelans were thanked for their resistance to the United States and its sanctions war. That experience has shown that the only way to counter was “to resist.”

Maduro who is on a Eurasian tour stopped earlier in Algeria and Turkey, skipping the Joe Biden Summit of the Americas which concluded Friday after he got no invitation like his counterparts from Cuba and Nicaragua.

Israeli Defence Forces chief of staff says air force is ready to strike Iranian nuclear facilities if the order is...

IRGC commander blames foreign enemies for stirring up unrest in Iran in fiery speech Thousands of Iranians gathered in Shiraz,...