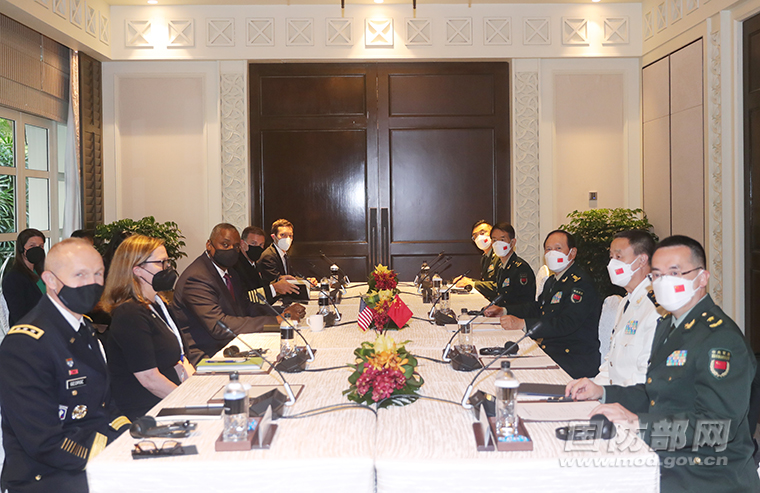 Chinese tell the US at Shangri-La

The Chinese Defence Minister General Wei Fenghe has told the US Defence Secretary Lloyd Austin that “Taiwan belongs to China” at the Shangri-La Dialogue in Singapore, Friday.

Wei said peace and development are facing very severe challenges at the moment and called on the global community to adopt President Xi Jinping proposed Global Development Initiative (GDI) and the Global Security Initiative (GSI) as the roadmap to global peace. The Chinese general also said that regional countries in the Asia-Pacific region should work together to maintain stability.

“China expects to establish sound and stable major-country relations with the US, which should also be the direction of joint efforts by both sides,” said General Wei. “The United States shouldn’t interfere in the internal affairs of our country, Taiwan belongs to China. That’s the only way you can save Chinese-American relations.”

Wei also added that the US must view China’s development and growth in a rational way, refrain from slandering and smearing China, containing and suppressing China, interfering in China’s internal affairs or harming China’s interests.

“The one-China principle is the political foundation of China-US relationship, and the scheme to use Taiwan to contain China is doomed to fail, the US government’s approval of arms sales to Taiwan has seriously undermined China’s national sovereignty and security interests,” he stressed. Warning the United States and its allies Wei stated “The Chinese government and military will firmly thwart any attempt for “Taiwan independence” and resolutely safeguard national unity.”

In response, Austin told the Chinese that the United States will continue to stand by its allies which includes Taiwan. “That’s especially important as the PRC (People’s Republic of China) adopts a more coercive and aggressive approach to its territorial claims,” the Pentagon chief pointed out.

Lieutenant General Zhang Zhenzhong, vice chief of the joint staff department of China’s Central Military Commission, called Austin’s speech a “confrontation” at a press briefing. “The United States is trying to form a small circle in the Asia-Pacific region by roping in some countries to incite against some other countries. What should we call this other than confrontation?”