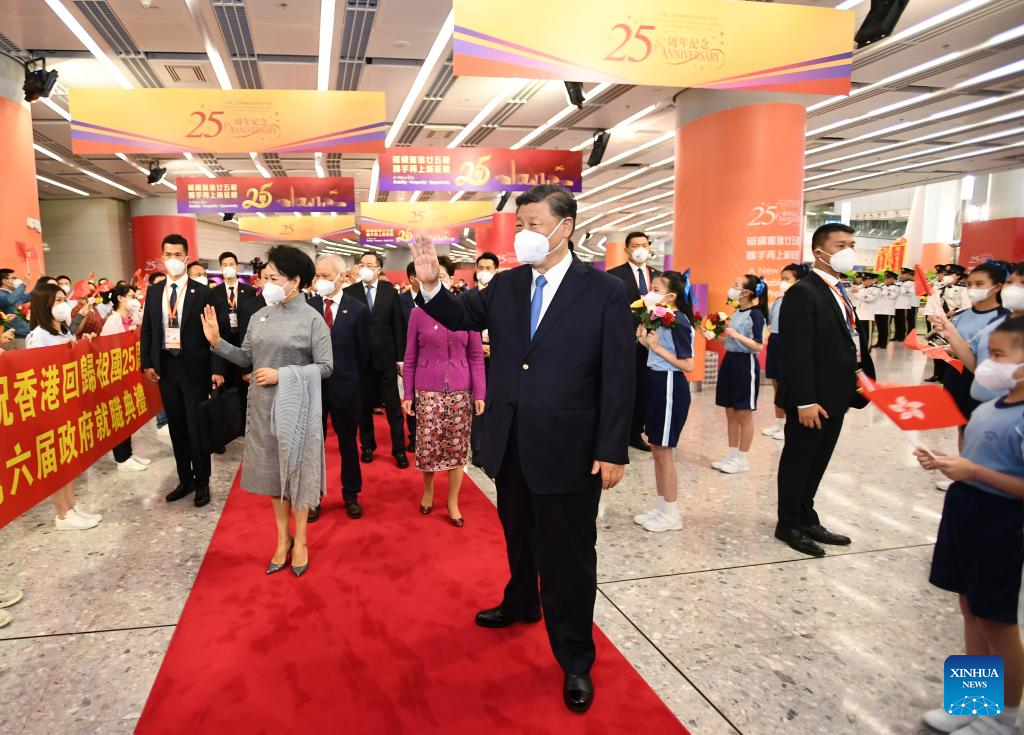 Chinese leader arrives for the 25th anniversary of the British handover.

Chinese President Xi Jinping arrived in Hong Kong by train on Thursday afternoon. Xi, who is also the general secretary of the Communist Party of China Central Committee and chairman of the Central Military Commission, will attend a meeting celebrating the 25th anniversary of Hong Kong’s return to the motherland and the inaugural ceremony of the sixth-term government of the Hong Kong Special Administrative Region (HKSAR) on July 1. Xi will also inspect the HKSAR.

Xi and his wife Peng Liyuan were greeted by HKSAR Chief Executive Carrie Lam and her husband Lam Siu-por at the West Kowloon high-speed rail station where hundreds of people waved flags and flowers at the welcome ceremony featuring the performance by the Hong Kong Police Band and lion dancing.

Xi congratulated the Hong Kong compatriots and extended his best wishes on the occasion marking the 25th anniversary of Hong Kong’s return to the motherland. On 1 July 1997 Britain formally handed Hong Kong back to China, ending the British Empire in the far east which lasted a 100 years.

“My heart and the central government’s heart are always with the Hong Kong compatriots. Over a period of time, Hong Kong had withstood a series of grave tests and overcome a series of risks and challenges. Hong Kong has since emerged stronger and shown great vigor.” Xi said.

“As long as “one country, two systems” is upheld unswervingly, Hong Kong will surely have an even brighter future and make new, greater contributions to the great rejuvenation of the Chinese nation.” The Chinese President stressed.