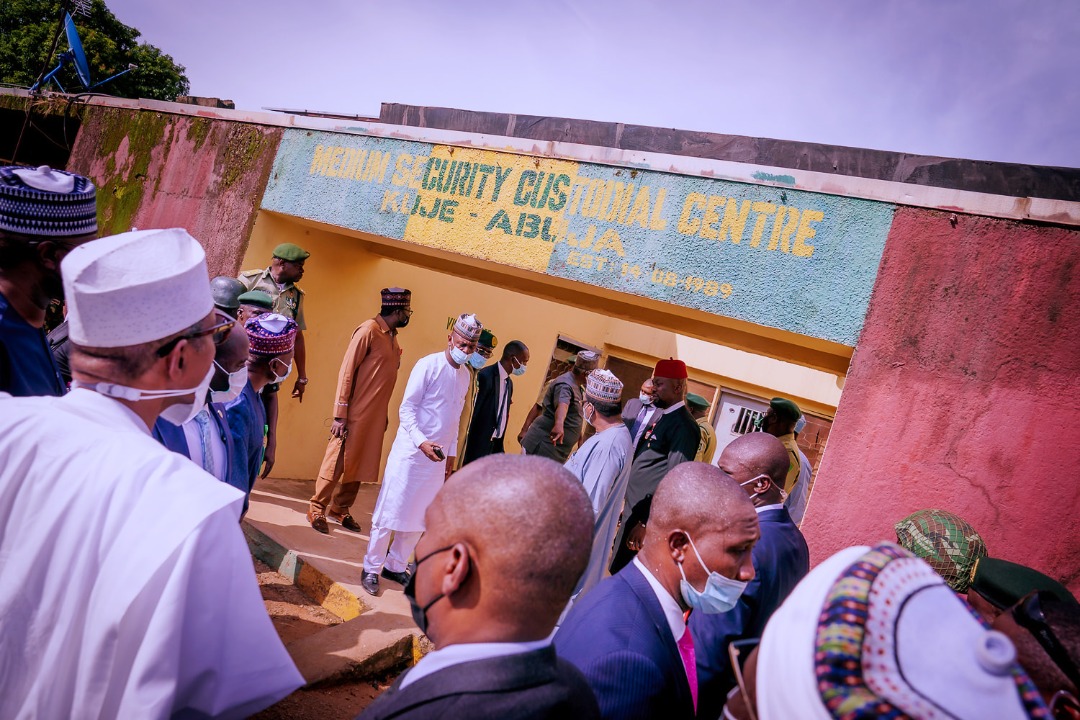 Suspected Boko Haram terrorists broke into the Kuje medium security prison Tuesday night and freed over 400 terrorists in a 2 hour operation using an explosive device to blow a hole in the prison wall. The Nigerian Correctional Service (NCS) said 4 inmates and 1 Nigerian Security and Civil Defence Corps (NSCDC) officer were killed. The Kuje medium security prison is located in the federal capital Abuja.

In a press briefing at the facility Wednesday, Umar Abubakar the NCS spokesman said explosive devices were used to blow up the main entrance and a side wall which the Boko Haram terrorists used to gain access to free their incarcerated members.

Nigerian Defence Minister Bashir Magashi who accompanied the President Muhammadu Buhari to the facility confirmed that the attackers were Boko Haram operatives.

“What actually happened, they came in their numbers and released some of the inmates. We are now trying to determine the kind of inmates they released. We are trying to see what we can do to see that all escapees within the prison accommodation are brought back to the prison yard.” He said.

“We are trying to see what we can do to see that all escapees within the prison accommodation are brought back to the prison yard. About 994 inmates, we have about 600 already inside now. Many people are being recaptured. The people who came to do this, from the records, belong to a particular group, from all indicators they are Boko haram.” He added.

Buhari on his part while touring the facility and pointing, expressed disappointment with the national intelligence establishment.

“How did the defences at the prison fail to prevent the attack? How many personnel did you have on duty? How many of them were armed?” President Buhari asked as he was briefed about the attack by Shuaib Belgore, permanent secretary, Ministry of Interior, and Haliru Nababa, the Controller-General of the Nigerian Correctional Service (NCS).

“I am disappointed with the intelligence system. How can terrorists organise, have weapons, attack a security installation and get away with it?” He asked speaking to reporters afterwards in a shaky voice.

“I am expecting a comprehensive report on the incident.” The President added, before heading to Senegal on Nigerian Air Force One to participate in the International Development Association (IDA) for Africa summit.