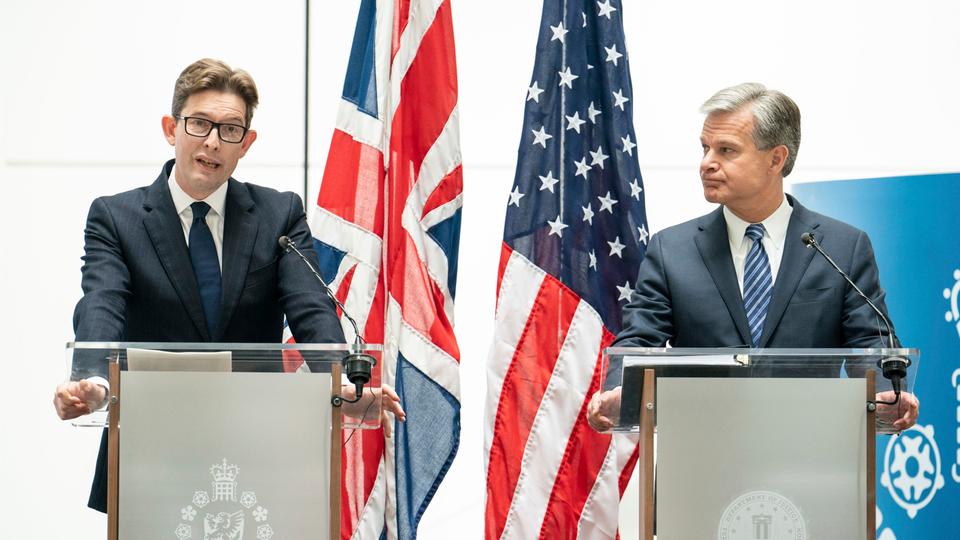 Heads of FBI and MI5 give warning about increased Chinese spying

The heads of the United Kingdom and the United States’ domestic intelligence agencies MI5 and FBI have warned of the growing threat of espionage posed by China to UK and US interests.

In a rare joint press conference at MI5 headquarters London, Wednesday. Federal Bureau of Investigation (FBI) Director Christopher Wray said that the Chinese government “poses the biggest long-term threat” to economic and national security, for the UK, the US and allies in Europe and elsewhere.

His counterpart the UK Director-General of Military Intelligence-Section 5 (MI5) known officially as the Security Service Ken McCallum nodded in agreement at the press conference.

“The service has already more than doubled our previously-constrained effort against Chinese activity of concern,” McCallum said adding it was running seven times as many investigations as in 2018.

“Early in his time as leader, President Xi said that in areas of core technology where it would otherwise be impossible for China to catch up with the West by 2050, they “must research asymmetrical steps to catch up and overtake”. The scale of ambition is huge. And it’s not really a secret.  Any number of public strategic plans, such as Made in China 2025, show the intent plainly.” The MI5 director-general said.

“The Chinese government is trying to shape the world by interfering in our politics (and those of our allies, I should add),” Wray said, pointing to evidence where the Chinese were allegedly trying to influence a congressional election in New York.

Warning the audience composed of businessmen and academics to be more careful and should seek co-operation with the security services if they notice anything unusual in dealings with China.

Speaking about Taiwan, which China regards as a province, Wray said that China may try to forcibly take it over and if that were to happen, “it would represent one of the most horrific business disruptions the world has ever seen.”

“The widespread Western assumption that growing prosperity within China and increasing connectivity with the West would automatically lead to greater political freedom has, I’m afraid, been shown to be plain wrong,” McCallum said.

“The Chinese government poses an even more serious threat to Western businesses than even many sophisticated businesspeople realise, and they are set on stealing your technology.” The FBI director warned.

The two domestic intelligence chiefs said the biggest threat was not Russia or Iran but China.

On July 1 on the occasion of the centenary of Russian intelligence Russian President Vladimir Putin charged Russia’s Foreign Intelligence Service known by its acronym SVR to collect data that will ensure Russia’s survival.  “It is important to see the big picture and pre-empt events. It’s necessary to obtain information about “military and geostrategic” plans that are potentially dangerous for Russia in a timely manner,” he said.

“In 2022, MI5 is having to stretch itself as never before – in multiple different directions. Front and centre of our minds is of course Ukraine where the human costs are horrifying. The long-term implications of Putin’s actions are a subject for another day.  But while our countries strain every sinew to support Ukraine in resisting appalling overt aggression, we’re also working to safeguard our homelands from covert threats from the Kremlin.” McCallum added noting the Kremlin directive on July 1.

The Chinese Embassy in London issued a statement which read. “The allegations against China by U.S. and UK intelligence officials are completely groundless and the so-called cases they listed are pure shadow chasing.”

The Chinese Embassy then urged both the countries to “have a clear understanding of the trend of the time, abandon the Cold War mentality which has long gone out of date, stop spreading “China threat”, and stop creating confrontation and conflicts.”