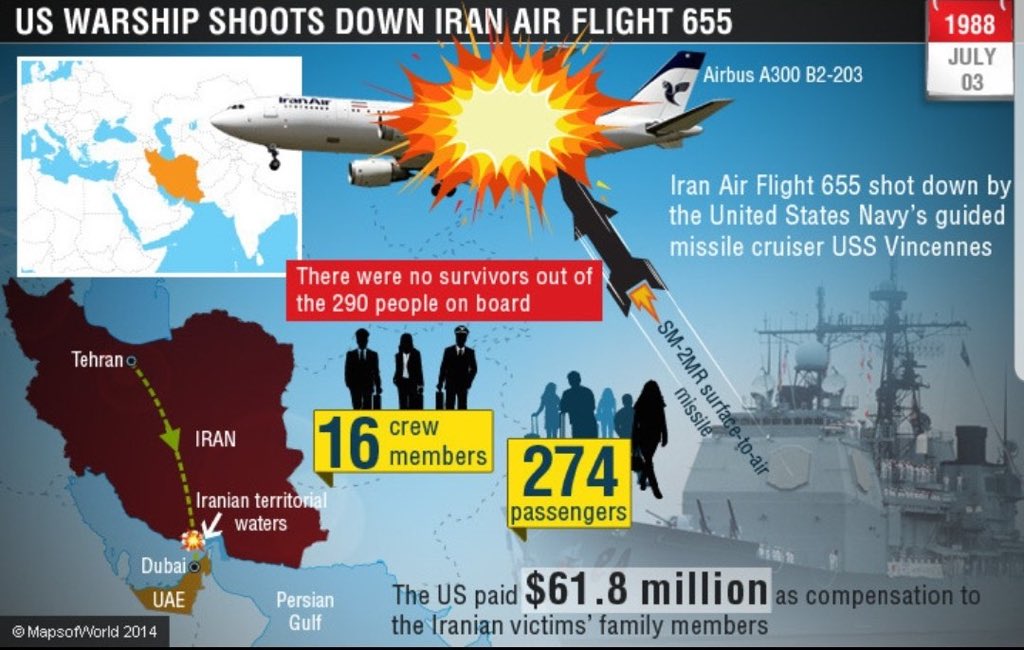 Newly declassified files from Her Majesty’s Government of the United Kingdom revealed that London covered up for Washington after the United States Ship (USS) Vincennes shot down Iran Air Flight 655 on July 2 1988 according to a report by Declassified UK released Wednesday.

Iran Air Flight 655 was en-route from the Iranian capital Tehran to Dubai when the US Navy shot it down over Iran’s territorial waters on July 3, 1988, killing all 290 civilians on board, including at least 66 children.

The USS Vincennes fired two SM-2 surface to air missiles which brought down the Iranian Airbus and the US Navy went on to claim the ship acted in defence after the Iranian aircraft had moved “outside the prescribed commercial air route”, and had been “descending” towards USS Vincennes at “high speed”.

According to the declassified files, After news broke that the US shot down Flight 655, Thatcher’s private secretary for foreign affairs Charles Powell “had rung immediately from Downing Street to ask what the Americans wanted the British Government to say.”

This was disclosed by Colin Powell in 2000 to Robin Cook. On 2 March 2000, UK Foreign Secretary Robin Cook met with US General Colin Powell, who had served as Ronald Reagan’s National Security Adviser between 1987 and 1989.

Powell “spoke frankly” throughout the discussion, leading Cook to request that the US General’s “confidence… be strictly protected” according to the files.

The British government thus offered immediate support to the US, despite its navy having killed hundreds of civilians, most of whom were Iranian citizens.

Colin Powell remarked how “America could count on no other government to behave like that”. Weeks after the attack the then British Prime Minister Margaret Thatcher backed Washington to the hilt despite the international isolation over the tragic incident.

“You cannot put navies into the gulf to defend shipping from [Iranian] attack without giving them the right to defend themselves”, she declared. The Foreign Office then emphasised that “the USS Vincennes issued warnings to an approaching unidentified aircraft but received no response”, and stressed that the US was responding to “an Iranian attack”. The constant criticism from Iran led many to believe that Tehran sponsored the terrorists that brought down Pan Am flight 103 when it exploded over Lockerbie in Scotland, killing 270 people five months later on 21 December 1988. Among the dead were 109 Americans.

In 1996, the US government paid Iran $131.8 million in compensation for the attack, and President Bill Clinton expressed “deep regret” over what had happened.

But, the US never apologized for the tragedy that caused one of the deadliest air incidents in decades.

Instead, the USS Vincennes crew was awarded in 1990, with its captain William Rogers awarded as the Legion of Merit for what the US government described as exceptionally meritorious conduct in the performance of outstanding service.

The USS Vincennes was decommissioned as a fighting ship and later scrapped in 2011.