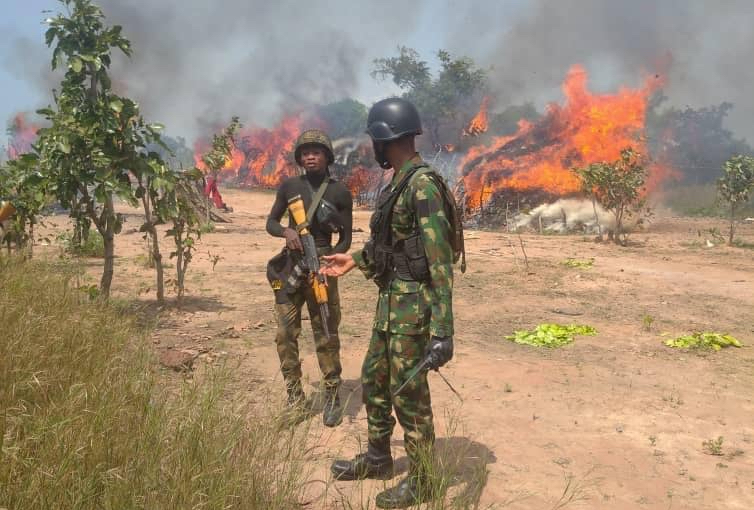 Nigerian Defence Headquarters (DHQ) has confirmed in its bi-weekly operational update, Thursday in Abuja that the terrorists who ambushed a Brigade of Guards patrol in Abuja the federal capital have been “neutralised”. Felastory had reported three days ago that three guardsmen were ambushed and killed on the Kubwa – Bwari highway with several wounded.

“Consequently, about 30 terrorists were neutralised and their enclave and hide out destroyed. Ground troops also recovered 6 x motorcycles, 2 x AK47 rifles, 1 x fully loaded LMG magazine amongst others during mop up.” Onyeuko told the media.

It has been revealed that two Guards officers and eight other soldiers of 7 Guards Battalion were killed in the ambush on Sunday. One of the officers was Captain Samuel Attah whose sister took to Facebook to bemoan the loss wrote.

“My pride, my hero, my beloved brother…Hmmm I lack words to express this dream. I can’t believe I am typing this. Rest in a very perfect peace. Captain Attah Samuel. God! God! God! Jesus help my family, my age parents. Ah! Only son! Who shall defend us?”. Attachegbe Rita Samuel a relative said.

The attack on the Guards will mark the second attack on the presidential protective detail in one month. The first attack on July 6, gunmen ambushed Buhari’s advance convoy, which included troops of the Presidential Guards Brigade, in Katsina State and wounded two officers.

The Presidency in a statement after the incident said gallant Presidential Guards repelled an attack on the advance team ahead of Buhari’s visit to Daura, his hometown in Katsina State, for the Eid-el Kabir festival.

With Nigeria under siege, the DHQ spokesman assured Nigerians.

“With the recent operations carried out between from 23 July we wish to assure residents of FCT Abuja in particular that we are undaunted and unrelenting in our efforts to ensure the safety of lives and properties. People should go about their normal business as their safety is guaranteed. The support and cooperation of all Nigerians is hereby solicited as security is everybody’s business. Citizens are encouraged to report any unusual persons in your community to security agencies. If you see something say something.”