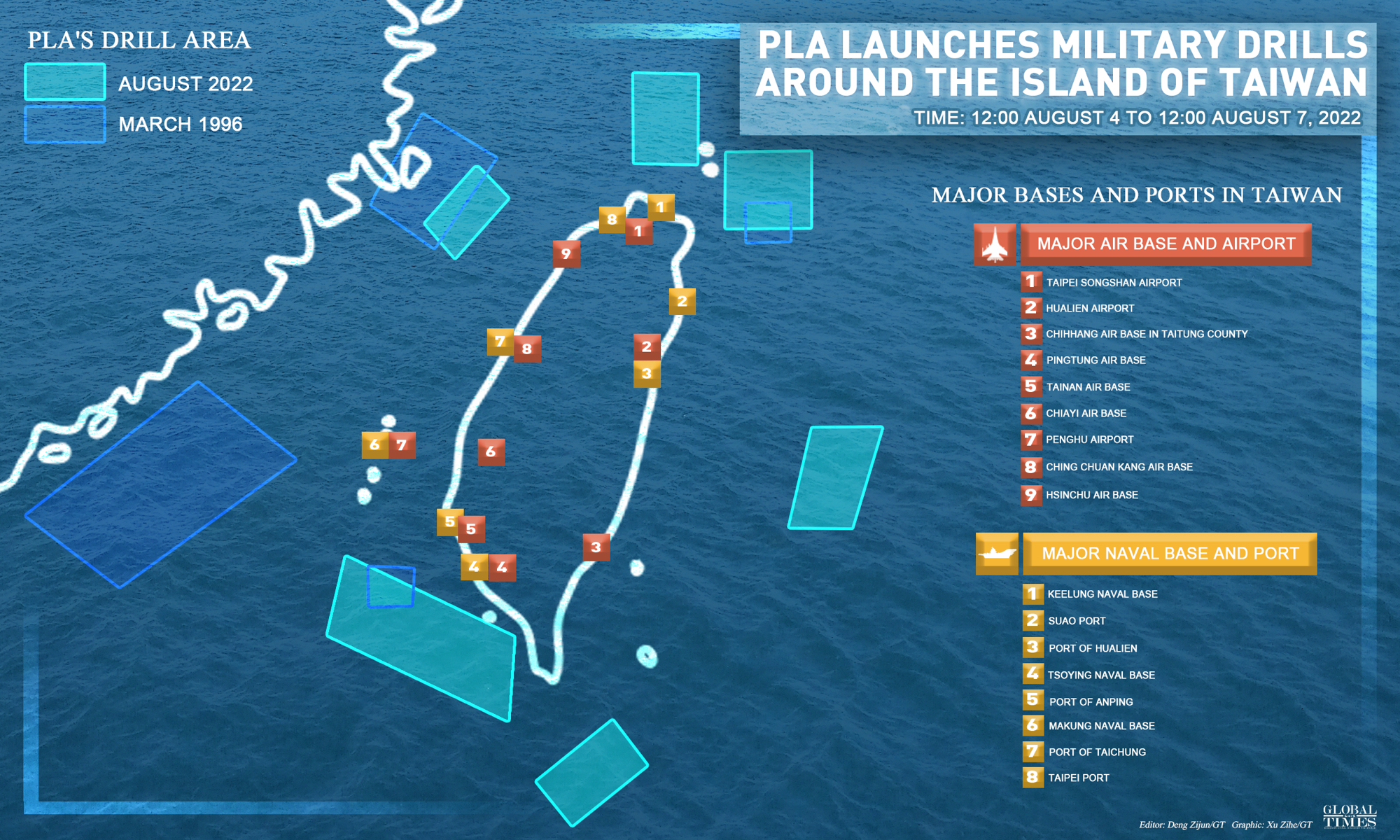 The PLA Eastern Theater Command said in a press release that joint blockade, sea assault, land attack and air combat drills were at the core of the operation, as the exercises tested the troops’ joint operational capabilities. The J-20 stealth fighter jet, H-6K bomber, J-11 fighter jet, Type 052D destroyer, Type 056A corvette and DF-11 short-range ballistic missile are among the weapons used in the drills.

Early warning aircraft and DF-17 hypersonic missiles also joined the exercises, according to a report by China Central Television, shows that one of the missile types featured in the drills is the DF-15, and that the missiles landed in exercise zones in the northeast, east and south of Taiwan island. The missiles were fired from the Chinese mainland, flying over the sky above the island of Taiwan, All missiles accurately hit their targets, proving their precision strike and area denial capabilities and marking the success of the live-fire training mission according to Chinese media.

The disputed island was hit with a cyber attack with most sites offline Thursday. The largest 24-hour convenience store chain on the island, 7-11was the victim of what Taiwanese authorities are calling an unprecedented amount of cyber attacks on government websites belonging to the presidential office, foreign and defence ministries as well as infrastructure such as screens at railway stations, in protest against Pelosi’s visit. Taipei has not directly blamed the attacks on the Chinese government, but has said that the attacks on government websites — which paralysed the sites’ operations — originated from addresses in China and Russia.

On Thursday morning, a US RC-135S ballistic missile detection aircraft flew to the Philippine Sea east of the island of Taiwan, with two aerial tankers and the carrier strike group the USS Ronald Reagan moved northeast toward its homeport in Yokosuka, Japan, away from the island of Taiwan. ccording to several military experts the Chinese have effectively blockaded the island for four days. 18 international air routes and 900 flights scheduled to pass the Taiwan Straits have been reportedly adjusted due to the drills. Airports in the island have canceled flights as of Thursday because of the drills.

The PLA has also demonstrated its exercise zones set in the northeast, east and south of Taiwan island are designated not only to blockade Taiwan and hit targets on the island, but also to prevent external forces like the US from intervening from its bases in Japan and Guam via the Philippine Sea and the Bashi Channel.

“As long as they go on with their secessionist actions, we will not stop displaying our determination to safeguard national sovereignty and territorial integrity,” Chinese Foreign Ministry Spokesperson Hua Chunying said at a routine press conference on Thursday.