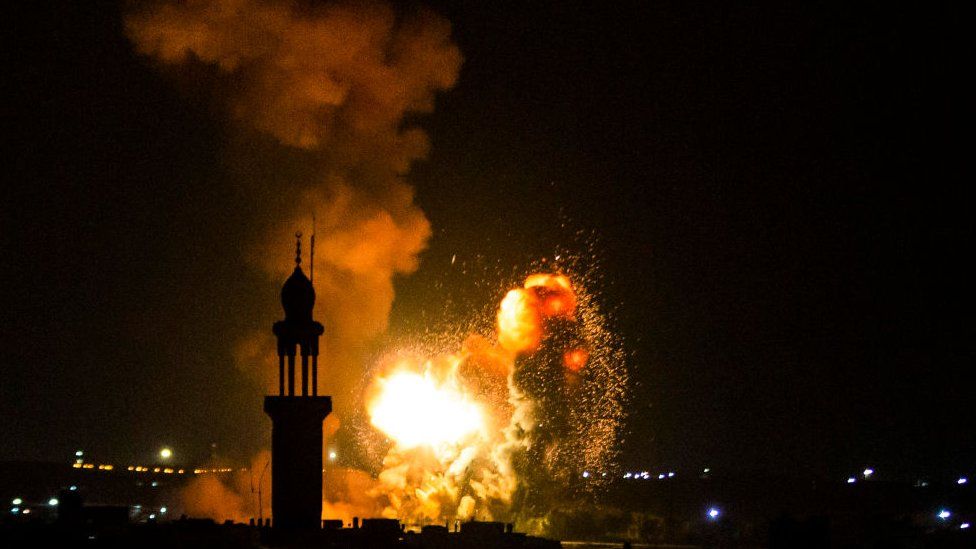 Israeli Defence Forces (IDF) continued battling the Palestinian Islamic Jihad (PIJ) fighters Sunday, in the Gaza strip as Palestinian rockets slammed into west Jerusalem for the first time. About 30 Palestinians, at least a third of them civilians and two of them senior PIJ commanders, have been killed in a surge of fighting in Gaza over the weekend, while rocket salvoes have sent tens of thousands of Israelis to shelters.

Sirens warning of rockets sounded in Mevaseret Zion, Kiryat Anavim, Abu Ghosh and Kiryat Anavim, communities some 5 km (3 miles) west of Jerusalem. An Israeli military spokesperson said rockets fired at Jerusalem had been intercepted over those towns. Rocket sirens sounded and explosions were heard in Israeli communities west of Jerusalem on Sunday, which indicated possible rocket attacks and Israeli aerial interceptions on the third day of a flare-up in fighting around the Gaza Strip.

“Quiet will be answered with quiet. If they keep firing, we will keep acting,” an Israeli military spokesman said. “If they stand down and stop firing, it will be quiet.”

World leaders are worried about the latest round of fighting between Israel and PIJ which began after Israel launched the Gaza strikes on Friday in what it describes as the pre-emption of an Islamic Jihad attack meant to avenge the arrest of a group leader in the occupied West Bank. The other Palestinian group Hamas the governing authority in the occupied Gaza strip is holding its fire.

Overnight, Khaled Mansour, a senior commander of the militant PIJ, was killed in southern Gaza along with two associates and five other civilians, When Israeli Air Force on Saturday night targeted a house in the southern Gaza Strip city of Rafah without warning, killing two Palestinians and wounding more than 30 others, the militants vowing revenge. “We will not let their blood dry before we bombard the settlements of the enemy”. Meanwhile, at least five people, including four children, were killed and 15 others injured by an explosion in the refugee camp of Jabaliya in northern Gaza on Saturday night,

The PIJ responded to Israeli Air Force strikes on Gaza by firing hundreds of rockets at Israeli cities with the Iron Dome interceptor shooting down 97% of rockets it has engaged during the weekend surge of Gaza fighting.

It has intercepted 97% of these during a flare-up of fighting with Palestinian Islamic Jihad militants in Gaza since Friday, an Israeli military spokesperson said, describing it as the system’s best performance so far.

Egypt said it was engaged in intensive talks to calm the situation. Further escalation would largely depend on whether Hamas, the Islamist group which controls the Gaza Strip, would opt to join the fighting alongside the PIJ. An Egyptian intelligence delegation headed by Major General Ahmed Abdelkhaliq arrived in Israel on Saturday and will be traveling to Gaza for mediation talks, They were hoping to secure a day’s ceasefire in order to carry out the talks, the sources added.

“Moscow is seriously concerned about a new round of armed violence in the zone of the Israeli-Palestinian conflict,” the statement reads. “We call on all the parties involved to show maximum restraint, prevent an escalation of military activities and immediately return to a sustainable ceasefire,” Zakharova added.

“We once again point out that it is only possible to end cycles of violence through a negotiation process that should lead to the implementation of the Palestinian people’s legitimate right to create an independent state within the 1967 borders,” Zakharova emphasized.