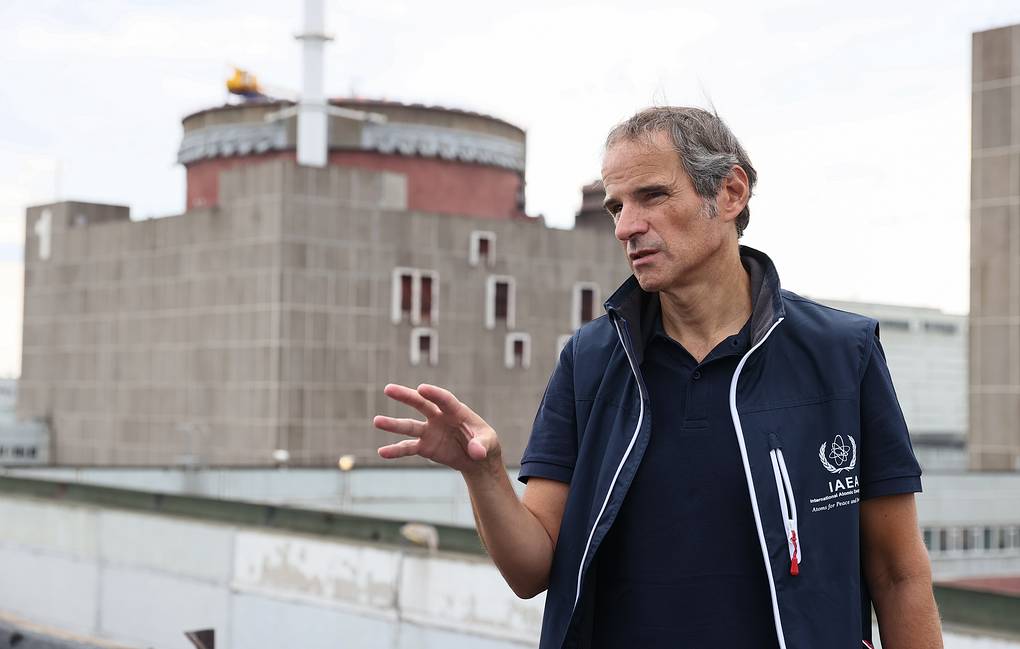 “We are finishing our long-awaited visit to the Zaporozhye nuclear power plant. I have just completed a first tour of the key areas that we wanted to see in this first approach to the whole facility. Of course, there is a lot more to do. My team is staying on. And more importantly, most importantly, we are establishing our continued presence from the IAEA here,” he said in a video published on his Twitter page.

Grossi told reporters that the IAEA team had conducted an initial assessment, had seen “the key things” they needed to see, and were planning to stay on.

Energodar residents, who Grossi talked to before leaving the plant, handed him a petition with over 20,000 signatures calling to stop Ukraine’s provocations against the nuclear power plant. They also handed the IAEA chief photos and eyewitnesses’ statements related to shelling of the city by the Ukrainian armed forces.

Earlier, Grossi told reporters that it had been hard for the mission to reach the Zaporozhye NPP. According to the IAEA chief, it is crucial for the world to know what is happening on the ground and the IAEA continued presence at the plant is needed to stabilize the situation and obtain regular, reliable and unbiased data.

On Thursday, the IAEA mission led by Grossi left the Ukraine-controlled area for the liberated area of the Zaporozhye Region to inspect the Zaporozhye NPP. The delegation, which is on a fact-finding mission to estimate the material damage to the plant and to evaluate the operational capabilities of the plant’s safety and security systems, arrived in the city of Energodar on Thursday afternoon. The experts are supposed to assess the staff’s working conditions and take urgent measures to provide safety and security guarantees for the facility.

Meanwhile an earlier attempt to seize the Zaporozhye nuclear power plant by Ukrainian troops was carried out under the control of the British intelligence. Vladimir Rogov, a member of the main council of the administration of the Zaporozhye region, told RIA Novosti. “The attempt by the Ukrainian side to seize the nuclear power plant, according to the information I have from sources close to Zelensky, was carried out under the control of British intelligence services,” he said. According to him, the paratroopers were trained abroad – in the UK and Poland . They returned to Ukraine via Odessa at the end of August. The early Thursday attack failed enabling the IAEA visit the plant.