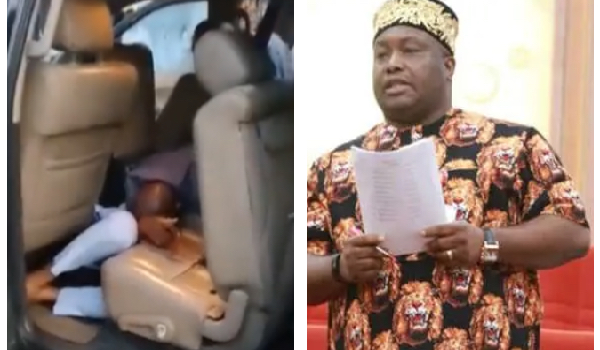 Suspected assassins struck the convoy of Nigerian senator Ifeanyi Ubah as he was passing through the Enugwu Ukwu community in Anambra State, Sunday, killing an unknown number of aides and the police escorts in a deadly ambush.

Sources said the gunmen opened fire on the convoy, and police operatives in the convoy returned fire but about six policemen were gunned down. The Anambra South senator and CEO of Capital Oil escaped in his bullet proof Toyota SUV.

A video of the attack showed the lifeless bodies of murdered policemen in about four of the vehicles in the convoy of the federal lawmaker.

Iyke Orji, a social media user wrote: “Sen Ifeanyi Ubah was attacked today by hired killers in Enugwu Ukwu. It was a calculated attempt. It wasn’t an impromptu stuff. Information was gathered about the time of movement and takeoff. The policemen were about four in numbers and they were attacked.”

“All their arms were collected.The boys that spearheaded that attack were about nine in numbers.” The social media user added.

Anambra State Police Command issued a statement saying that the Police Commissioner Echeng Echeng is leading a tactical and forensic team to the site of the deadly ambush.

“Though the details of the incident are still sketchy, operatives are on the ground there as operations are going on and the situation is being monitored. Further details shall be communicated please.” The police spokesman DSP Toochukwu Ikenga stated.